This is the last topic on the Orange forum.

For the last few months there has been a real drop-off of interest in the forum. With the rise of Orange-specific Facebook groups, most of the questions that are being asked there would have been asked here previously. Times change. Add to that a rise in the number of spammers who join incessantly, and it has become difficult to separate fake members from real. 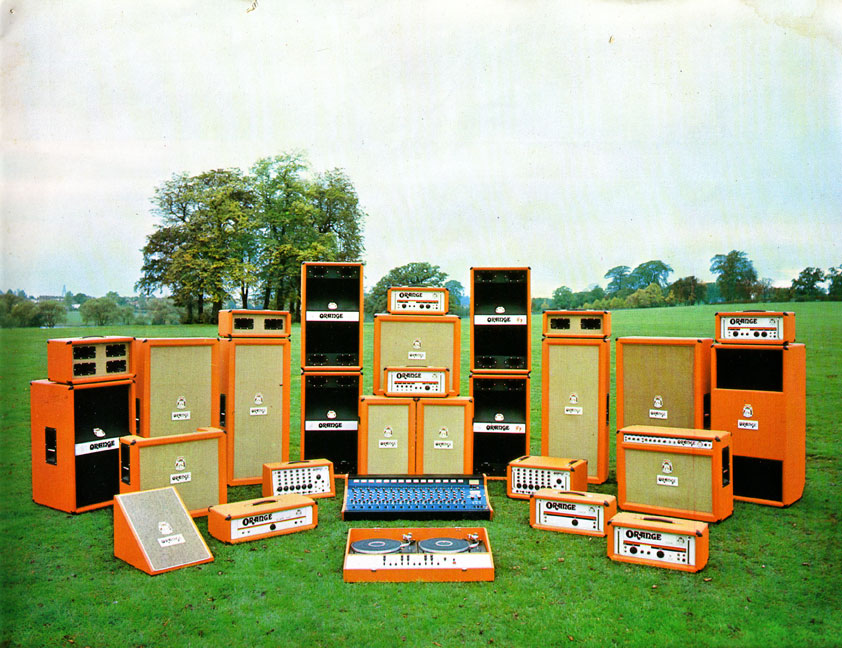 I started coming to the forum in 2002 when I was a fledgling Orange fanatic looking for information anywhere I could find it. I had all the amp books that had a fleeting reference to Orange, like Aspen Pittman’s “The Tube Amp Book” and Ritchie Fliegler’s book, “Amps!: The Other Half of Rock 'N' Roll.” Ritchie’s book had a black and white photo from Nite Bob’s archives of the back page of the 1973 catalog with the enticing spread of Orange gear across a field. I hoped to find information on the forum, but I found myself answering a lot of people’s questions instead. After a few months, I emailed Jason Green and asked why Orange wasn’t answering the questions on the forum, and his reply was “By the time we’ve read them, you’ve already answered them - would you want to moderate the forum?” So I did, starting in 2004, and it’s been a fun fifteen years of doing so.

Over the years I’ve come to know so many new people around the world that I regularly keep in touch with. In my travels I’ve met up with a few in London, Wales, here in the USA, and typically raise a pint or two with them! Some people that I’ve met have left the Orange camp, but I still keep in touch with them to this day. It was fun lending my amps to Orange for the 50th celebration display at NAMM a couple of years ago, and I really enjoyed meeting Cliff Cooper both at Orange HQ UK when I went over to visit and in Anaheim at NAMM. Everyone at Orange has been extremely helpful and friendly over the years and I would be remiss not to mention Alex Auxier, Mick Dines, Charlie Cooper, Neil Mitchell, Will Loftin, Ade Emsley, and many others who I have met or spoken to over the years. Add to that that I’m mentioned in the Orange coffee table book and I can die a happy man!

We will lock the forum but leave it in place as a resource for people looking for information.

So remember:
• check your fuse
• use a known working cable/guitar/speaker cable
• it’s probably tubes/valves
• don’t touch anything inside
• plug one 16 ohm cab into the 16 ohm out; two 16 ohm cabs go into the two 8 ohm outs
• don’t mix ohms
• don’t try to run two heads into a stereo cab
• call Orange

It’s been great! See you out there…
Billy Claire

Thanks for all your efforts over the years Billy, as a long time member but only very occasional poster (so can't really grumble) I'll miss the forum but things do change. I'm a member of the FB group but have to say, the input on here over the years was largely informative and interesting, the comments on FB . . . Well not so much!
All the best to all on here, thanks for all the interesting info and entertaining threads. J.
Gibson Les Paul standard
Fender strat
CV tele
Epiphone Sheraton
Charvel pro Mod type 2
Faith and eko acoustics
Orange dual terror
Fender Blues Jr
Ppc112 cab
Proc212ob cab
Peavey deuce
Not enough pedals!
Top

Thanks for all the work, Billy!!

So long......and thanks for all the fish

Well, I know some of the you in the Orange Facebook page, but I will miss the place.

Truth be said, the traffic around here has been very slow for the last 12 months, and i thought it would come down to that.

But the Orange forum is a much more civilised place IMO.

Thanks for looking after it all that time Billy. Much appreciated. I'm sure you've saved a few from electrocution, and have managed to keep the Orange forum a nice place.

Thanks Billy! I’ve certainly enjoyed this forum and its going to be an adjustment not checking in for new posts! I had a feeling this was coming for reasons you mentioned.
Cheers,
Jon

Thanks Billy, it's been a good run. I think I joined back in 2005 or so myself. How long will this forum stay up now? Forever?

Well this sucks, but is understandable I guess.

Thanks for the efforts.
Top

Thanks Jim-
Not sure - we'll have to see down the road...

Jondog wrote: ↑
Sun Nov 17, 2019 11:54 pm
Thanks Billy! I’ve certainly enjoyed this forum and its going to be an adjustment not checking in for new posts! I had a feeling this was coming for reasons you mentioned.
Cheers,
Jon

Thanks Jon- it's been quieter and quieter over the past year. Not like back in the day when there were lots of posts each day! I've enjoyed reading them all!

Thanks for your work.
I found much good information here.
Cheers
Top

That's a bit sad. Moreover for the ones like me that doesn't want to put a toe in facebook.

Despite the low activity, I really liked this forum.

Users browsing this forum: No registered users and 71 guests