After using the amp for close to 2 years, I upgraded the filter caps on this monster.

The stock caps were fine, however, I was suspecting the caps were the reason i could hear hum, with nothing plugged in, and it was more of a high pitch noise that was bothering me, hum i understand would occur.

Someone who builds amps suggested that I replace the stock caps with better ones, the stock ones were some JAKEC branded caps, which are Chinese, and right after the changed the caps, the amp is a lot more silent and that high pitch noise issue is gone.

Note:- before i did the mods, i tried the amp at various places, with different guitars, tubes, cables, power supplies to isolate the issue, however the issue still did exist.

As expected, these changes made no difference in the tone of the amp, and were purely to ensure the amp has better caps!! I love the tone off this as it is...

Another thing I did was to replace the V1 ECC83 with an ECC82, that did wonders, opened up the amp, lowered the gain, better clarity and note separation, more clean headroom than before. Gain i get now at full, is what I used to get at 12oClock on the Gain pot with the stock tubes.

Here's a clip before and after tube swap - https://www.youtube.com/watch?v=ZgVfQ_2xOYY" onclick="window.open(this.href);return false;

Here are some images of the changes, i replaced the caps with better quality caps, i.e. Panasonic etc...

The caps highlighted were removed. 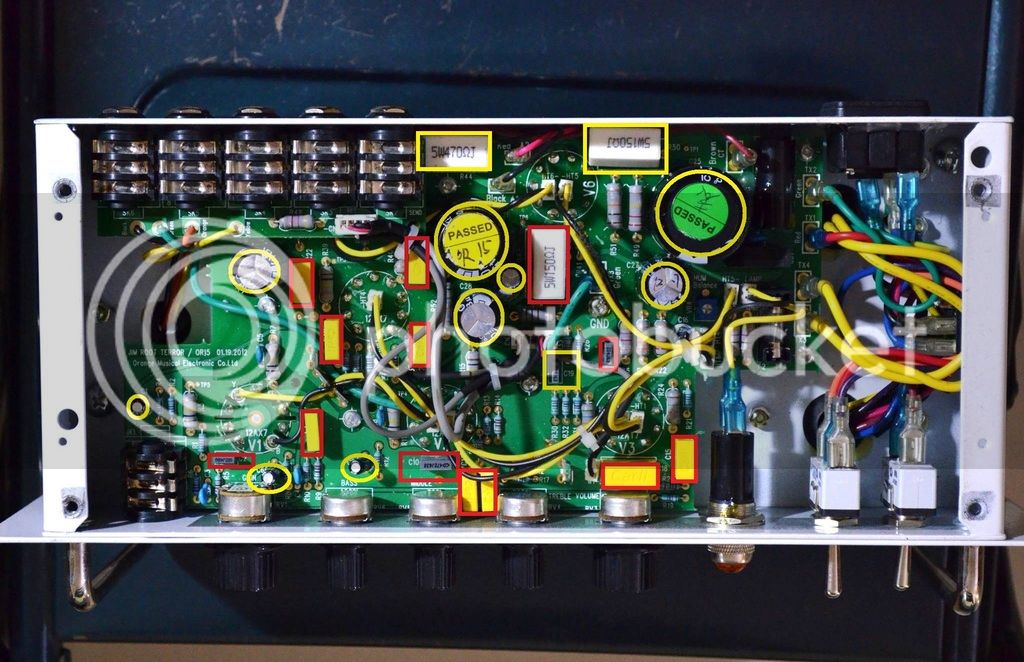 Removing the cans was pretty tough, the glue under was quiet a task to remove before i could pop out the caps.

Ripped the outer casing off the caps, and was then able to remove them off the board after desoldering.

Users browsing this forum: No registered users and 44 guests