i received an old Matamp amplifier and an enclosed Matamp speaker (they seem to have being bought together). The amps serial number is 006. The guys at the music store thought that it would be from 1969 and that it would belong to the ORST series. The tubes needed to be replaced and also some small components but otherwise the amp is in it's original form. Does anyone here have a clue about it and what it is approx. worth?
Top

Some pics and details of serial number 007: http://orangefieldguide.com/OFG_MATST.htm

They've been popping up lately, though. I know of a couple that have been sold in the last two years. Before that, I had never seen one appear for sale in the previous ten years. You should post some pictures.
The Orange Amps Field Guide……………. 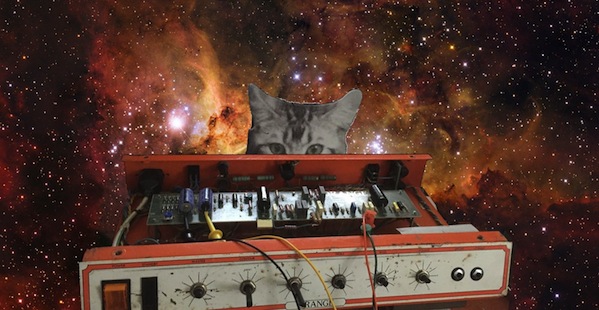 Ok, for an unknown reason i could not upload images to this message so here is a link to my picasa album:

I picked up the amp yesterday from a music store where they replaced the tubes and a few other small parts. The guy who does the testing there had played with it for 4h, all wound up about how powerful and incredible it sounds 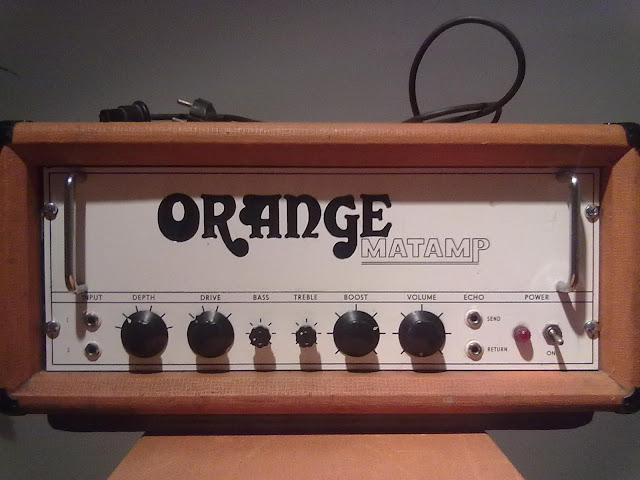 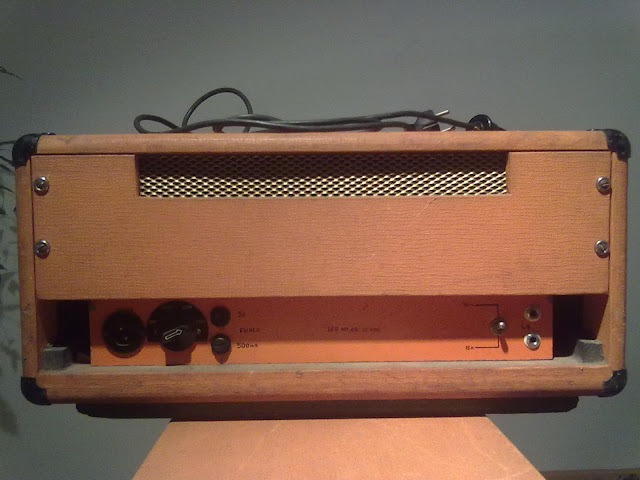 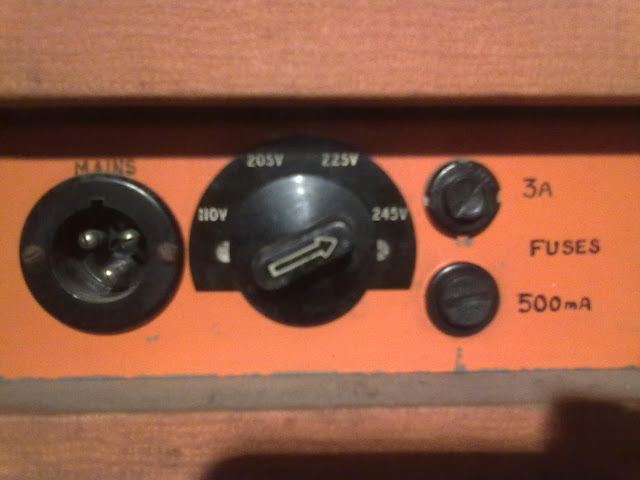 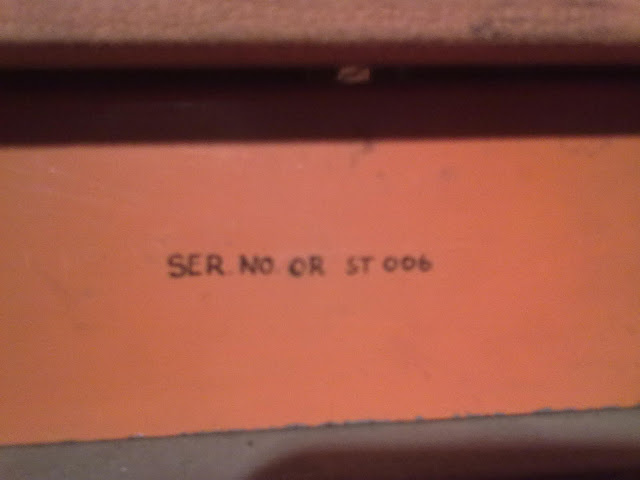 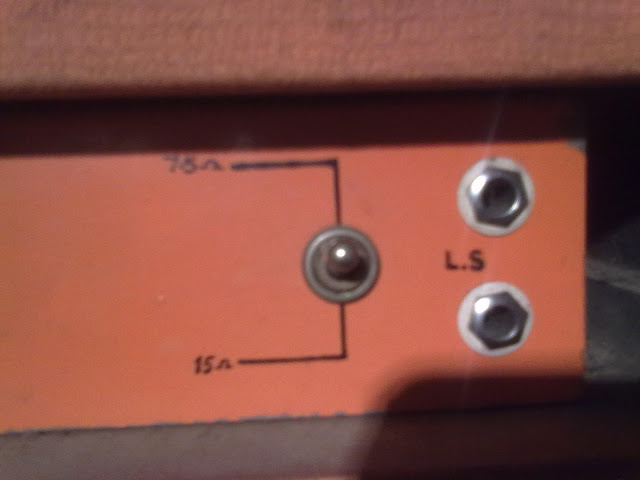 Wow... that's sweet! Beautiful condition and just a total treasure! and I love the hand-written bits on the back!

I'm planning on selling the amp and speaker so i would really appreciate if someone could give even a rough estimate of the price range. I've tried to ask around, also from Orange, but so far no one has a proper idea...
Top

sam78 wrote:I'm planning on selling the amp and speaker so i would really appreciate if someone could give even a rough estimate of the price range. I've tried to ask around, also from Orange, but so far no one has a proper idea...

Hard to say. Rare very early amp, in nice nick. To the right buyer, worth a fair bit of money. To a skinflint Scot in Euroland like me, well even if I 'needed' it I couldn't justify the price it really deserves. Several thousand of whatever your local currency happens to be seems likely.

Good luck finding the right buyer and thanks for the pics!

Cheers Andy! It's good to get even some kind of an idea. Figuring out a reasonable price is pretty tricky as i don't even know how old it is. There is nothing in the internet about guitar Matamps with a serial 006...
Top

You definitely have to find the right buyer to get top dollar, but I would think that half stack is special enough and clean enough to warrant a price of at least $4,000 USD. A comparable M*rshall Super Lead setup from 1968 would be worth somewhere around $5,000 from what I've seen, though they are in higher demand (but there are more of them too). The right collector might pay substantially more if a bidding war takes place.
_________________

I know there is a guy on the PlexiPalace forum who got one for a steal from a guitar center in California for $1800 about a year ago. That was an amazing deal. I think the last OrMat sold on eBay in the US for about $3000, and even that was a pretty good deal. An OrMat Reverb just sold on eBay in the US for $3000 as well. That's not such a deal, but the verbs are VERY rare. The ORSTs are very rare as well. I'd agree with that $4000 figure for the half stack. That whole setup is pretty phenomenal looking. I bet it sounds like butter as well. I hope you put it to good use or sell it to someone who will give it a good home.
The Orange Amps Field Guide…………….

Thanks people! Still trying to date it though. I found a guy who's worked at Orange since 1968 so maybe something from that direction but still all info is very welcome!
Top

I'm here for your rescue. I have #003 and since I layed my paws on that little gem I was curious as well on how old it might be. This started a little research quest that got a little out of hand. I ended up visiting Matamp in the UK, going through Mat Mathias old records. I sat down with Jeff Lewis and we looked at pictures of my amp to figure things out. He has the #001 OR100 by the way.
I was also lucky enough to visit Matamp just when the first ever Orange Matamp prototype ended up at their doorstep. This amp is actually an Matamp Series 2000 in an Orange Matamp sleeve.
Anyway. I have also spoken directly to Derek Thompson and the builder of my amp John Firth. I have also had some e-mail contact with Mick Dines at Orange. They all worked for Cooper Mathias back in the 60's.

In the very begining, after the 1st prototype amp (the Series 2000 thousand one) they built six OR100 with two KT88 for Fleetwood Mac's US tour in 1968. According to the The book of Orange there were about 50 more of these amps built. Probably none of these amps exist today as they were built on an aluminium chassis and just barely made it through the FM tour, having Mat with them at the later half of the tour just to keep repairing the amps after every other gig.

After this prototype era, Cooper and Mathias started building the OR100 and ORST amps in 1969. Some amps was even sold before they founded the company Cooper Mathias ltd.
Take a look at the back of your amp. If you compare your amp to the pictures of the very next amp, #007 you'll see that your amp doesn't have the Cooper Mathias ltd. badge on the back, so your amp is most likely built before the 15th of august 1969.

I'd say that if you find the right buyer, this amp with the matching cabinet (which is very rare for such an early amp) is worth a lot more than €1200. You have to find a buyer who understands how rare these amps are, and are willing to pay for what it is. Only about a hundred were made and only 6 without the Cooper Mathias badge!!

I'd love to see some guts pictures of your amp. I'd probably be able to tell you which components are original and what's been replaced. You see, I have a little collection of pictures of all ORST amps I've seen.

PM me and I'll provide you with an e-mail address.

It's hard to tell from your pictures, but is there a carrying handle mounted on top of the amp?
If not, yours were in the same batch as mine and shipped off the factory at the same date. They were shipped to Scandinavia and no handles were mounted to fit the box they shipped the amps in.
David
I'm speaking out of my a$$. Yours might differ.
Top

These pics you speak of. They'd look mighty nice on the Orange Amps Field Guide....

Orphin wrote: I'd say that if you find the right buyer, this amp with the matching cabinet (which is very rare for such an early amp) is worth a lot more than €1200. You have to find a buyer who understands how rare these amps are, and are willing to pay for what it is.

I think I was saying exactly that. The €1200 wasn't a serious suggestion / offer David!

Agreed, but it hasn't been updated in over a year.

I've been collecting pictures over the past few years and have been thinking about creating a new version of the Field Guide that is a little more user-friendly....

What do you think? Who actually "owns" the information there? There's no real copyright is there?

Users browsing this forum: No registered users and 2 guests