A thread for Big Muff lovers

A thread for Big Muff lovers

God bless the Big Muff. Such a great distortion/fuzz pedal. The history and lineage of just this one particular pedal and all of the different versions of it floating around out there, each with their own personality and tone, is fascinating.

I can still remember the first time I heard one. I had stopped in at a little music shop I used to frequent for strings and things back when I was a teen in '95. I had seen ads for this "reissue big muff pedal" in guitar magazines and thought the name was kinda funny. I saw one sitting in the display case and decided to try it out not knowing anything about them. I played a v7 green russian bubble font through a mid-90's Laney VH100 head. It was almost a religious experience for me. Since then, I always wanted one, but I never had the money for one. My folks wouldn't buy one for my birthday or xmas because it was too expensive at the time. I quit playing guitar for a number of years, and came back to it in 2016. I started looking online trying to find one, not knowing that they had become highly collectible and pricey as hell. I was SHOCKED when I saw prices like 400 bucks attached to them.

I looked and looked and wasn't able to find a green russian one ANYWHERE in my state, but I did manage to find a v8 black russian Big Muff from 2008 (according to the sticker in the battery area), which was one the last years they still made them in Russia and was also one of the few that was wired true bypass. It was in pretty shabby shape, missing the rubber feet, missing the battery door, had a hole drilled into the side of it to fish a power cord through to attach to the battery connect. I found some feet for it in some junk parts I had in the basement, and I meticulously precision redneck-fabricated a replacement battery door for it from some sheet metal with tin snips and channellock pliers. It's kinda ugly, but it gets the job done. It sounds really similar to the green ones. But... it's just not the same. I also bought one of the recent op-amp Big Muff reissues. I'm not too crazy about it. And even thought I do have a Russian one, I've still obsessed over wanting a GREEN v7 one, tall font or bubble, but preferably bubble font (like the first one I ever played).

Finally found one on the internet just after Xmas for a really good price, 220 bucks, a lot better than the 350 and 400 bucks I've been seeing. It appears to be an early bubble font version in a tall font style housing. Should be delivered sometime next week. I can't wait to finally get it and play through it. Now I can get on with my life... and probably find some other pedal to start obsessing over.

I like to screw around with photoshop sometimes, making desktop wallpapers and graphic mods for old PC games. I made these desktop wallpapers. Thought I'd share them. They're all 1280x1024. I know most people probably don't use that anymore. I'm using an old archaic standard ratio monitor, not a widescreen. So if anyone wants one of these in a wider size, let me know what size and I'll try to do it. Can't really go too much taller than 1024 pixels though, I'd have to artificially stretch it and it would degrade the image quality a bit. 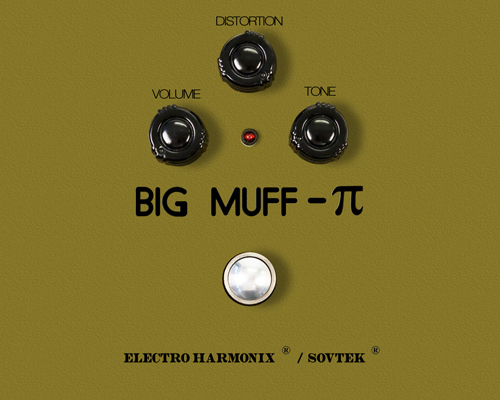 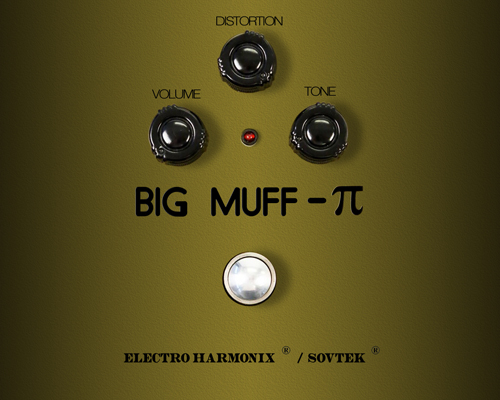 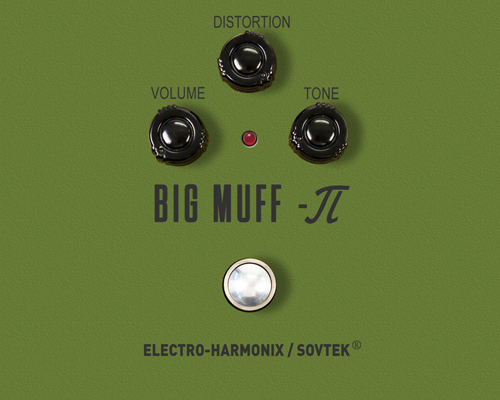 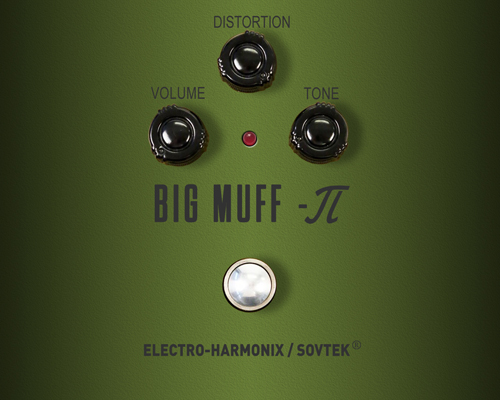 I also have another one of a real photo of a v8 black russian Big Muff that I played around with to make it into a wallpaper. Still 1280x1024. 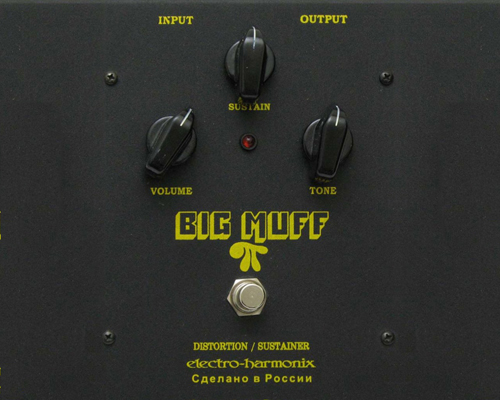 Yeah, a good big muff is a great tone.

If you're very interested, check out the pedal kits for big muff at fuzzdog.

He didn't have as many when I did my clone, but his clone kits library keeps expanding.

His clones can be a good way to have fun and end up with a lovely pedal at the end of it.

My big muff pi clone was an hybrid of multiple circuit, and I tweaked the tone stack to add a mids boost at noon rather than a mids cut, added some germanium 1n34a clipping diodes, and used the same transistors as the pharaoh.

That said, I think I preferred the swollen pickle I used to have. It was amazing!!!!
Ant

I'm a Big Muff lover! I have:
- All the Nano size EHX re-issues (Op Amp, Green Russian, Triangle, Ram's Head).
- EHX Nano Big Muff (the smaller version of the NY Big Muff).
- JHS Muffuletta.
- BAT Sarcophagus (one side, the Pharaoh, based on a tweaked '47 Ram's Head circuit, the other side, the LSTR, is based on a Black Russian circuit).
- VFE Fiery Red Horse (based on a very tweaked Triangle circuit).

It's a lot of Muff for sure. They all sound great to me with different characteristics and I try to play all of them as much as possible.
Top

My long awaited green russian big muff came in the mail a couple of weeks ago. I've been wanting one of these babies since I first tried one out in a little guitar shop back in 1995. So for TWENTY FIVE YEARS, I've been dying to get one. I mentioned that I did already have a v8 black russian one. And from everything I had heard, a black russian muff was "almost" as good as a green one and most people can't tell the difference sound-wise.

I tried both side by side, and the green one blows the black one away. It sounds WAY better.

I got super lucky, I guess. $220 (250 w/shipping) was a good price considering all the other ones I've seen posted on Guitar Centers site are marked at around $350 or better.

And it's in remarkably clean shape. It's an early transitional bubble font model, using a tall font style cast metal housing with bubble font graphics. It's missing the little plastic battery door... which seems to be very common with these pedals when you find them. But all 4 of the rubber glued-on feet are still in perfect shape. The paint on it is in really good shape. The previous owner took a silverish-white paint pen and wrote "IN" and "OUT" over the jacks, perhaps to see them better in low light, I dunno.

I cracked it open to examine the inside to see if it had ever been repaired or modded. The pots are the green resin filled type like the tall font and civil war big muffs had, which I suppose seals out all the dirt and crud that commonly collects in pots after a while... because the knobs operate completely silent and smooth, it's terrific! And after comparing the circuit to other pictures of tall font and bubble font big muffs, it appears as though mine has several components common to the tall font muffs as well as the early versions of the transitional period bubble font muffs. It was kinda hard to get a great picture of it, but here it is. 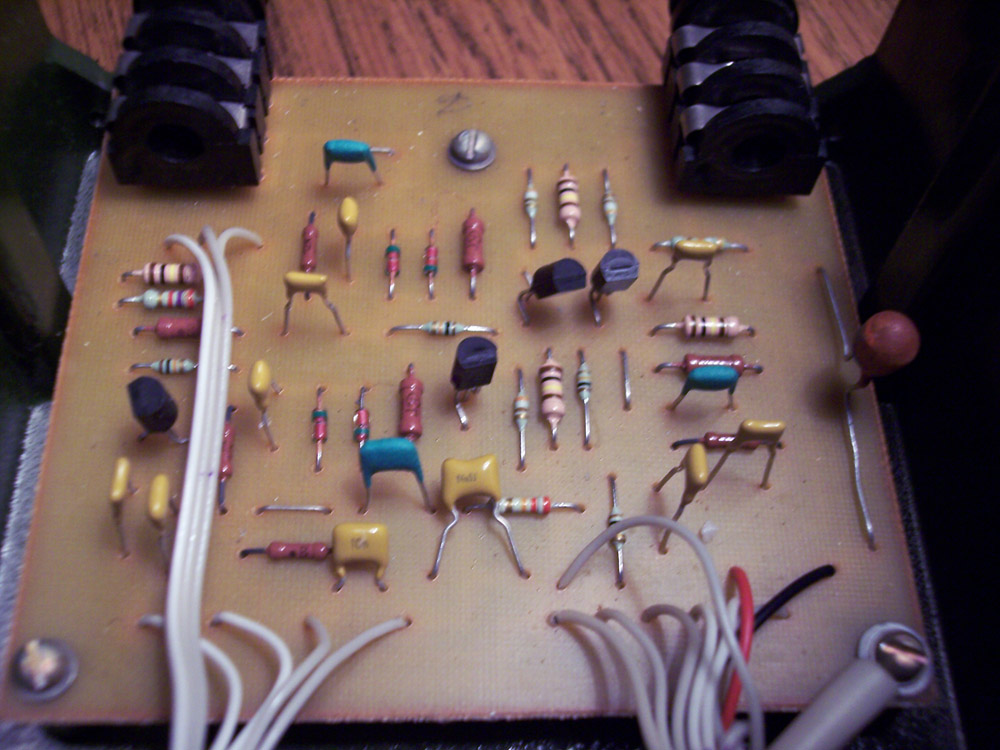 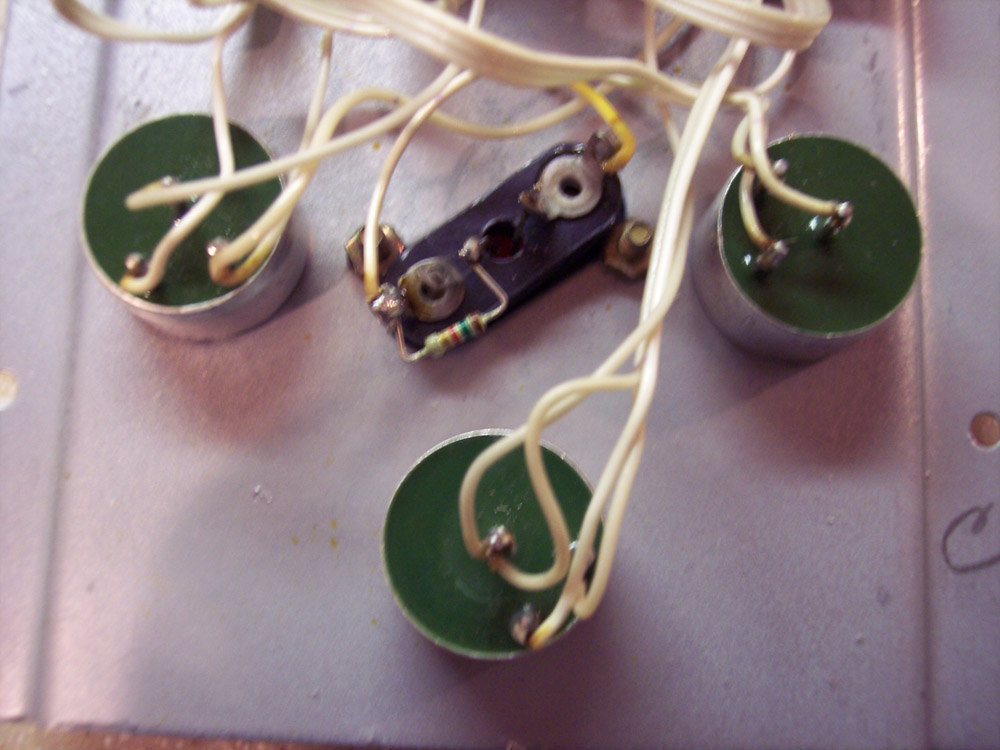 It's certainly not true bypass though. Like my old Vox wah, it sucks half the treble out of your signal when the pedal is in the chain and disengaged. I'd prefer NOT to use a boost pedal in my chain to compensate for anything like that. Anybody know of a decent and very cheap little effects loop toggle pedal or something?
Top

Theres lots of little looper pedals out there, or if your handy make one for cheap. Had a Black russian muff long ago. Amazed how much they’ve gone ip in price since then.I think I paid $50 on ebay for it. Now they’re 3x that.

Users browsing this forum: No registered users and 39 guests