Remember Jeff Healey? I certainly do. Not many people talk about him, but he was one of my favorites. He's part of the reason why the movie Road House was one of the best movies ever made (yes, I'm one of THOSE people, lol).

So I was watching this old video of Jeff Healey from back in 1991 I guess, and starting at the 2:55 mark, he begins using what sounds to me like some kind of octave or octave-fuzz combo effect along with his wah pedal.

(effect in question starts at about 2:55)
https://www.youtube.com/watch?v=Z6S7_vRVPUU

At one point, the video shows the front part of his pedal array, and most of them look like various DOD pedals from around that time ('91) as well as a Boss compressor (I think). I'm not hung up about getting the EXACT SAME make and model of effect, but I do want it to sound exactly like that.

I haven't looked extensively for this kind of effect yet, but I've looked at a couple of things before, and this is just to narrow things down and cross things off the list.

MXR Blue Box - NOPE. Don't like that effect AT ALL. It makes your guitar sound like an Atari game. Ew. Not fer me.

EHX Octavix - Wasn't impressed with that one either.

Fulltone Octafuzz - I really like this effect as the fuzz isn't so overpowered and heavy metal sounding, and I will probably purchase one at some point, but I'm not sure if it's exactly what I'm looking for to get this specific sound.
Top

The Blue Box certainly isn't for everyone, but in certain (usually pretty specific applications), man...that thing SINGS. If you get the balance set right, it can be a little extra sauce on a solo. MMMMMM MMMM! I love it.

To your question: the Blue Box is certainly glitchier than what you're looking for, but from the first clip, it sounds like your average octave fuzz pedal.

Maybe I haven't used enough of them to hear what you're hearing but this is how they've all sounded to me (more or less).
RV 50 MKI | TH30 | RV 50 MKIII
G&L Tele (ASAT Classic) | Musicman Bongo 5
Anesthesia - Post-Rock/Ambient band - anesthesiaproject.com
Top

Perhaps you saw the short glimpse of his pedals that happens at 6:38. Took a screenshot of it. Perhaps you are right. 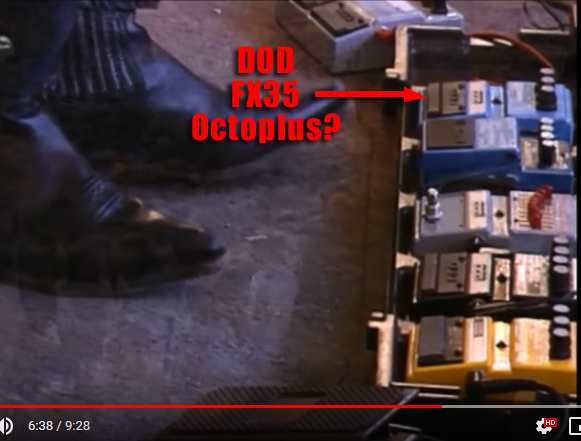 Did some hunting online. They typically go for around 70 bucks, but Guitar Center doesn't have one anywhere at the moment. From what I've learned about it online, it appears to be just a single octave down pedal, no fuzz. Whatever I end up buying, I would PREFER an octave effect like that, WITHOUT fuzz so that I can pair it with whatever fuzz pedal I want.

From what I've heard in review/demo videos I've watched of several different octave-fuzz pedals, many of them sound bad to me. In terms of digital audio, it's like some of them have piss-poor "sampling rates" (even though they may be analog) and the octave effect just sounds stuttered, cheap, and crappy. Others have fuzz that is so overpowering, they might sound similar to something like one of those really really awful DOD fx86 Death Metal pedals. Most of them, it's a combination of those two qualities. I'm "weird" about my fuzz. I like it on lower settings to where it produces more of a "muted buzz" and behaves somewhat dynamically like overdrive. Perhaps that's counterintuitive to the entire point of the fuzz effect, ...but that's me.

Anyway, as I initially suspected, it appears like I'm looking for an octave pedal. Any recommendations on one with a good (and I stress this part) NATURAL sounding octave to it?

EHX has a Pitchfork pedal and a few iterations of the POG effect. I've seen a pic of Satriani's board from lately, and he had a Micro POG on there. Anybody got any experience with those? Differences between them, etc?
Top

I had the POG2 (micro pog bigger brother) and its incredible, but its precise where some of those older octave pedals are not which makes part if the sound. What I’ve read the DOD Octoplus is loosely based on the Boss OC-2 octave pedal. Jeff was endorsed by DOD.

I read the same thing on the old DOD archive site, AmericasPedal.net. It also has this comment:

" Like all octave dividers, the FX35 cannot track chords very well (although root-fifth power chords can sound okay, at least until one note starts to warble out), but tracking can be enhanced by using your neck pickup and/or adding a boost or compression pedal before the FX35."

So that would explain the peculiar placement of the Boss compressor just before it. Most people put them much earlier in the chain.
Top

I looked around a little bit for a DOD Fx35 Octoplus and wasn't able to find one. I did end up buying an EHX Pitchfork around September or October of last year. It doesn't really get the sound I'm looking for. The octave effect on the pitchfork is somewhat delayed by whatever sampling process it does, and the pitch shifted notes are degraded in overall sound quality too. At 175 bucks new, it was quite a pricey pedal for something that I ended up having little to no use for. *sigh*

And after doing a little looking, I'm gonna disagree that what is shown in the video I posted was a DOD FX35 Octoplus. I'm more inclined to think it's a DOD FX90 Delay. If you notice in the picture, the name of the pedal just above the DOD logo only goes to about halfway across the pedal to end under the 2nd knob, like it appears on a FX90 Delay. Whereas the "Octoplus" logo extends to under the 3rd knob, which isn't happening in that screenshot. 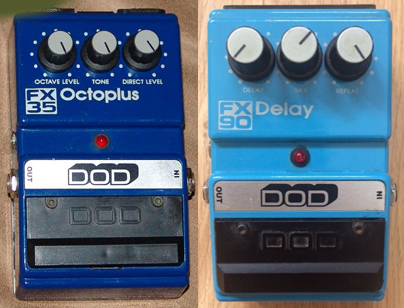 They have a DOD Fx35 listed on the guitar center site for about 50 bucks, and I'm tempted to order it, but I'm kinda trying to save up my gift cards for a hardwired mid-90's EHX Electric Mistress flanger once I have enough to cover it and once they get one in decent shape in somewhere. I do all my pedal shopping through guitar center (unfortunately, kinda) because I do online marketing surveys about all kinds of things and the points I get from it I redeem for guitar center gift cards.

I'm thinkin since Joe Satriani also sometimes uses such a sound, perhaps his pedalboards would offer hints, and really the only octave pedal I've ever seen on his boards was the EHX micro-pog. So perhaps I'll give one of those a test drive next time I see one somewhere.
Top

Another option is the EHX Frequency Analyzer.

Somewhere I have a picture of Satch's pedalboard from the tour he did with Johnny A. opening... and me guitar teching. I'll look for it....

Yeah, the one I saw was a little different and had a newer model XO sized MicroPOG.


In the pic you posted, looks like it's followed by a Boss DS1 distortion and then a Boss Super Shifter. 2 pitch shifting pedals there, but with a POG of some type getting used twice, I think it's maybe more likely he's using the POG for his octave down effect, which I'm pretty sure he's used in more songs than just the one I posted. That's so frustrating though, because I could've bought either the Pitchfork OR the MicroPOG, and stupid me chose the Pitchfork without even testing the MicroPOG because I thought it was more versatile and would be just as good. It's got the ability to do a chorus-like detune effect, and it can tune to intervals, not just octaves. But it seems to have been the wrong tool for the job. It might've worked if it weren't for that really odd delayed timing to the effect.
Top

I have the tc Electronics G-System which has an octave down (or up) available. I like adding the octave down in solos at times because it really adds something different to the sound although I'm worried that extended use at solo volumes might eventually wreak my speakers....

Okay, so let's call this "PART 2" of the Name That Effect thread.

I recently bought myself a lightly used EHX Deluxe Electric Mistress flanger, one of the old wide-cased brushed steel looking things. It's one of the later "Version 5" models before they stopped making the old ones, the ones with NO transformer inside the case and used an external 24v adapter for power. It sounds WONDERFUL! It cost me 200 (225 with tax & shipping). Money WELL spent. Maybe I overpaid a little, I dunno, but if I did, I don't even care. It sounds so good, and these things are getting harder and harder to find these days, so I'm just glad to have it.

So if you're familiar with them, (of course you are) you know it has three jacks on the top of the unit. 1 input, 1 direct out, and 1 flanged out. I'm assuming the direct out is just a dry unaffected signal. My issue is... I absolutely LOVE the sound of the pedal, but even at the lower "range" and "color" settings, the effect is still a bit too prevalent for some applications. I'd like to effectively add a "blend" knob to it. To do that without performing surgery on the pedal, I figure I could run the "direct out" and "flanged out" into one pedal after it with a blend knob that would blend the two signals into one output.

But I don't really see any pedals that do that kind of thing. I see lots of A-B-Y switcher pedals, but no 2-into-1 blend pedals. Anybody know of any pedals that can accomplish that? Preferably something pretty small and cheap.

I've seen some kind of JHS "summing" pedal that just blends the 2 inputs to 1 output evenly, no knob. That ain't gonna work. I need a blend knob.
Top

Users browsing this forum: No registered users and 29 guests