I started looking for a better amp than my Hughes & Kettner blues attax solid state amp.

After trying blues junior, deluxe reverb, some Marshall or others, i was blown away by the Rockerverb 50. The price tag was substantial..... and thought that if I was possibly buying a RV50 and PPC212, i might as well try everything I could with a similar price tag.

Some of them were pretty nice and left a favourable impression (notably the AC50, fender bassman and DRRI).

But only one made me hesitate with the RV50, it was the Genz Benz Black Pearl 30.

Single channel with an adjustable gain / volume boost.
Beside the 3 band EQ, it has a 5 way voice switch - I believe the equivalent of the old OR120 FAC knob. You can go from bright too thick and dark voicing.

I really hope it'll live up to the memories I've got from it..... because they're almost impossible to sell on!

Fender killed the guitar amp line of genz benz when they bought that company, and few people know these amps.

Great thing when buying them 2nd hand..... I just scored an amp that cost £1200 10 years ago for peanuts (around the price of a squier vintage modern)..... but if the amp doesn't work for me, it'll take me a while to find a buyer and get some peanuts back!!!!

Not my photo, but one I found online.... that amp belonged to one of our forum member, Thinline_Slim.

Cool, hope its what you remember!

I'm really excited, but Tuesday is a long way away!

From trying it out 9 years ago, I was really impressed, and followed it on ebay ever since. It's 2nd hand price is ridiculous as the brand is so little known by guitarists. But really great amps.

Been reading lots of owners comments and reviews, when somebody owns one, it's a bit akin to the Orange R30. People are really happy to own one and find themselves really lucky to have one.

It's Tuesday !! Have you received it ? I'm curious about this amp, never heard about before you mentioned it.

Be ready to retube it immediately if it doesn't sound like what you remember....

Nice! I used to have a Trace Elliot Speed Twin 50 that I still want to get again. Super unreliable amp but my memory of it's sound is just sterling. 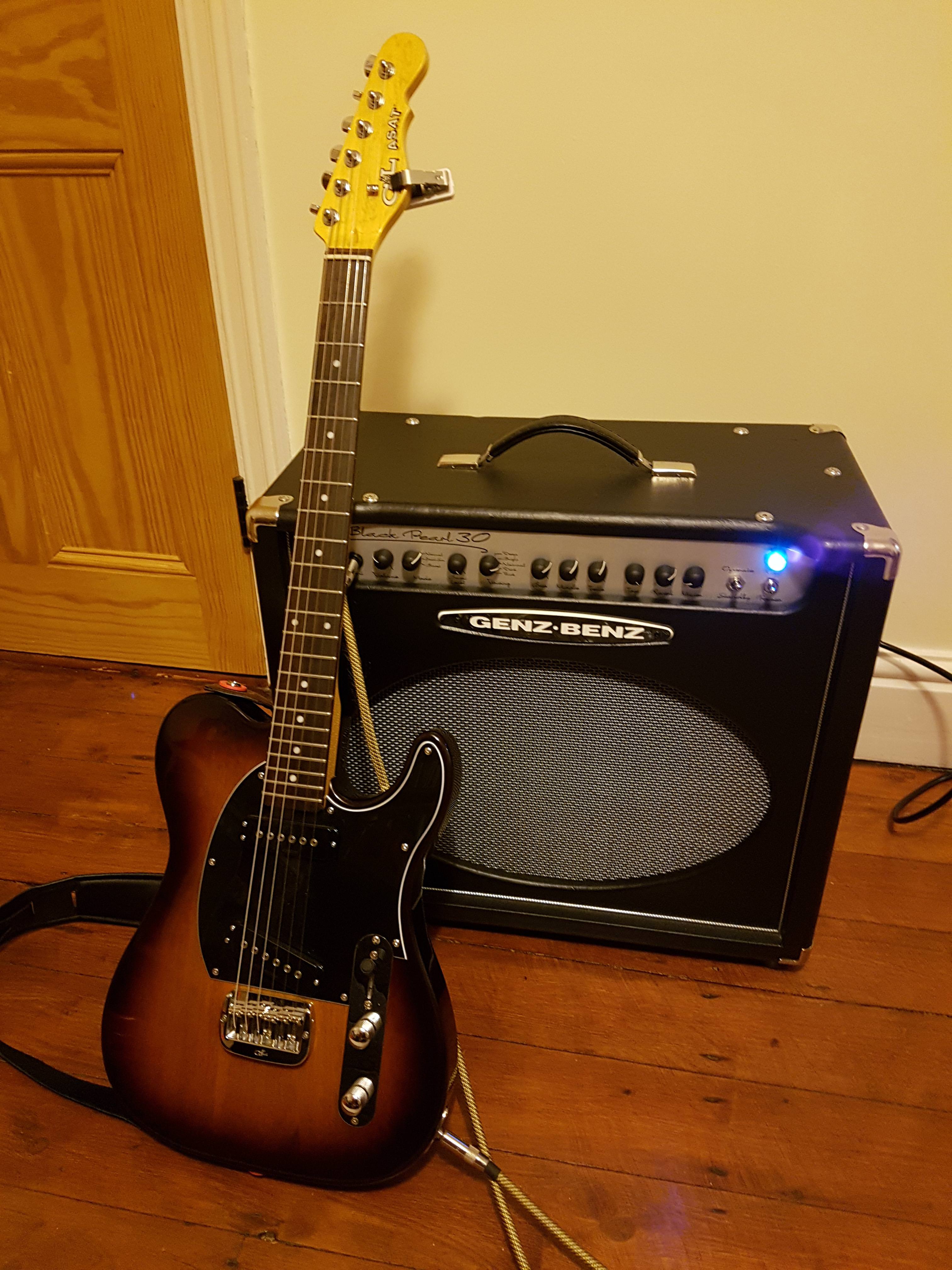 Picked it up after a 3h round trip.
The amp is brilliant!!!!

It sounds beautiful!!!! Brilliant cleans, and low gain affair.
2 gain stages, and a 3rd valve gain stage available on a footswitchable boost function.
Even with 3 gain stages, it feels like it has less gain than my 2 gain stages AD15.

Early days, but great sounding amp. A real gem I might say!

One of the wonderful with this amp is the voice switch. 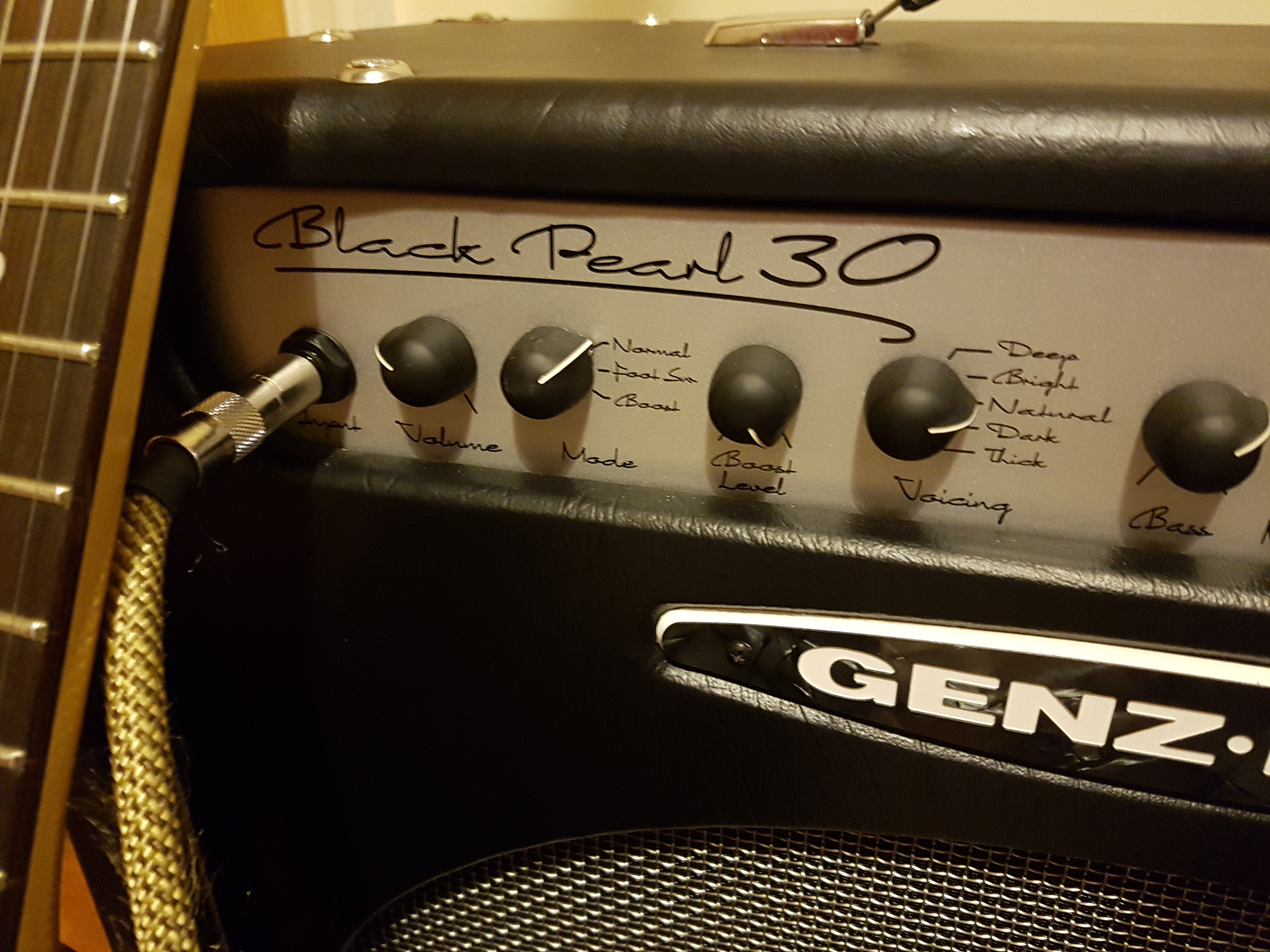 From looking at the schematic, the voice switch, like the fac control on old OR120 amps, engages various capacitors just before the tone stack.

Goes from fendery to voxy to dark and thick....
It's it's own thing, but for now, I'm smitten!
Ant

Thankfully, it sounds great!!!! Good thing, because it's an expensive one to revalve!!!

Sometimes, one has to stop and take stock. I'm just incredibly lucky. Sure, i haven't got bensnake or thejay's man cave, but hell, I have some incredible gear at hand, and have the luxury to choose which I will keep.

It feels pretty good to finally own the 2 best amps I had tried back in 2008.


Also..... to anybody playing an AD30 around the edge of break up, the black pearl is direct competition there.
A great different alternative. They are great value 2nd hand too - I got mine for £350 - that's just about the price of a new eminence red fang and a full set of valve for this amp. I got the amp for free pretty much......
Ant

the black pearl has been one of my lusting amps for a while, and i know it has for you also.. very stoked that you got your hands on one!

I used a Genz Benz El Diablo combo for about 5 years and it was a killer amp. Their stuff was really underrated.
I remember loving the Black Pearl I heard back then and still hope to find a head locally someday on the cheap.

I'm pretty relieved now I finally got one.
I've been trying to sort out a few deals over the last 6 or 7 years, but they never happened.

It sounds superb, and now I can find out if I can make it work for me.

Can't wait to spend more time with it!!!
Ant

Surgeon wrote: ↑
Wed Mar 14, 2018 3:19 pm
I used a Genz Benz El Diablo combo for about 5 years and it was a killer amp. Their stuff was really underrated.
I remember loving the Black Pearl I heard back then and still hope to find a head locally someday on the cheap.

The black pearl is pretty different to the Diablo (as you know), but what an amp!!!

Its sound is stellar. Can't wait to put it next to my AD15- I suspect the black pearl to have nicer cleans, and can't wait to compare their edge of break up.

The BP might have less gain though. We'll see.

Users browsing this forum: No registered users and 122 guests