Hi ,
It has been a while since I posted.
(I was trying to post photos but seemed to get an error

To be sure about this it would be helpful if anyone out there had some pictures of the rear screw fixings compared to the later Orange cabs, as I think they were different.
OM cabs were 5 fixings per side compared to 4 fixings per side?
I understand the other major difference is the depth of the cab, OM being around 30 cms compared to 38 cms??

Moving onto the amp, my head has 4 visible pins fixing the chassis to the box, and many OR120's I see don't have these visible.
When did the design change and which one came first??

thanks for listening
GaryB
Top

Here are some pictures of my rig.

I have two Orange 4X12's - one is an OrMat cab; the other early - mid 70's. They are exactly the same depth - and the same as modern Orange cabs since the new covers I have fit perfectly. I'd have to check but I think the screw pattern is exactly the same. If yours is different than that, maybe it's really early.

The heads had the four front screws visible until about 1972 or so. I looked at the Orange Amp Field Guide for that - comparing the graphics and dates with the heads and a combo that's on there.

I wonder what those speakers are? Are there any identifying marks on them?

To be honest, nothing about that cabinet looks right to me. The logos are all newer than an OrMat cab; handles are wrong; speakers look wrong; depth of cab is wrong; the corners are wrong; and the spacing of the screws on the back is all off....

The speakers are Fane, I am pretty sure of that, even though they don't have any markings. (just some numbers on the speaker cones)
I can post pictures if needed.

When I got the head and cab in the early '90s, I had them both recovered.
On the 4 x 12 I also had the basket weave replaced, and handles added, as there were no cut outs. (just strap handles I recall) There was no piping on the 4x12 cabinet either, so this was added as well along with the badges.
All this was done by Jeff at Matamp.
At the time, I just assumed it was an Orange cab, as the vynide was orange and the basket weave was consistent with Orange cabs. and the speakers were "Orange" and I purchased it with the Orange head.

As time has gone on, I realised the depth of the cab and the screws fixings were different.
There was a guy on this forum Oli (Queen of Heels) who says he has a similar cab at the same depth, hopefully he will get some pictures of his posted to finally work out what this 4x2 actually used to be.........

Yeah, I'd love to see pictures of that one. In a way, it's unfortunate that all of the restoration was done since it destroyed any originality of the cab. But it looks nice though... I wonder how it sounds compared to subsequent deeper cabs? I have a feeling that the shallower depth affects the sound in a negative way.

Never had the chance to play through a deeper cabinet, but the one thing that I notice is that the sound it really punchy, to the extreme.
I spoke to Oli (who I referred to in my earlier post) 2 years back, via email and ironically he said the same, and he owns both cabinets.

Hi all
an update on the my 4x12 cab which I am trying to identify.

Thanks to Oli (Queen of Heels) who sent me a picture of his OM cab sat ontop of an Orange cab.
Important things that help me are:
The width of the OM cab compared to the Orange cab, (narrower) and perhaps as importantly,
The fixings for the rear panel - 5 per side on the OM cab compared to 4 per side on the Orange cab.
Mine is loaded with unlabelled FANE speakers that have an Orange chassis

Of course as mentioned earlier in the thread, my cab was refurbished in the early 90's by MATAMP, so it looks more like an Orange cab. BUT finally I know what it once was.

here is the picture from Oli - a big thank you to him!

OK so I totally spun out on looking at my cabs until today.

However, I was surprised when I counted screws: the OM has 5 on the side while the 70's only has 4 - never noticed it before.

Now, in re-looking at your pictures I believe there are three problems with your cab that you think is an OrMat.

First of all, metal handles? They didn't use metal handles on OrMats - there was a small rectangular cutout high up on the side that was boxed in with wood painted black.

Secondly, those are the wrong logos - unless they were replaced, the Orange logo should read Orange Matamp and NO crest logo.

Lastly, the uneven spacing on the screws on the back has me suspect.... I don't think Orange or Matamp would have been that careless.

I wonder what that cabinet actually is...

For example, here are two pictures of an OrMat cab- note the logo with Orange up top and Matamp to the bottom right and NO crest.

Inside the cabinet notice the boxed in handle enclosures. 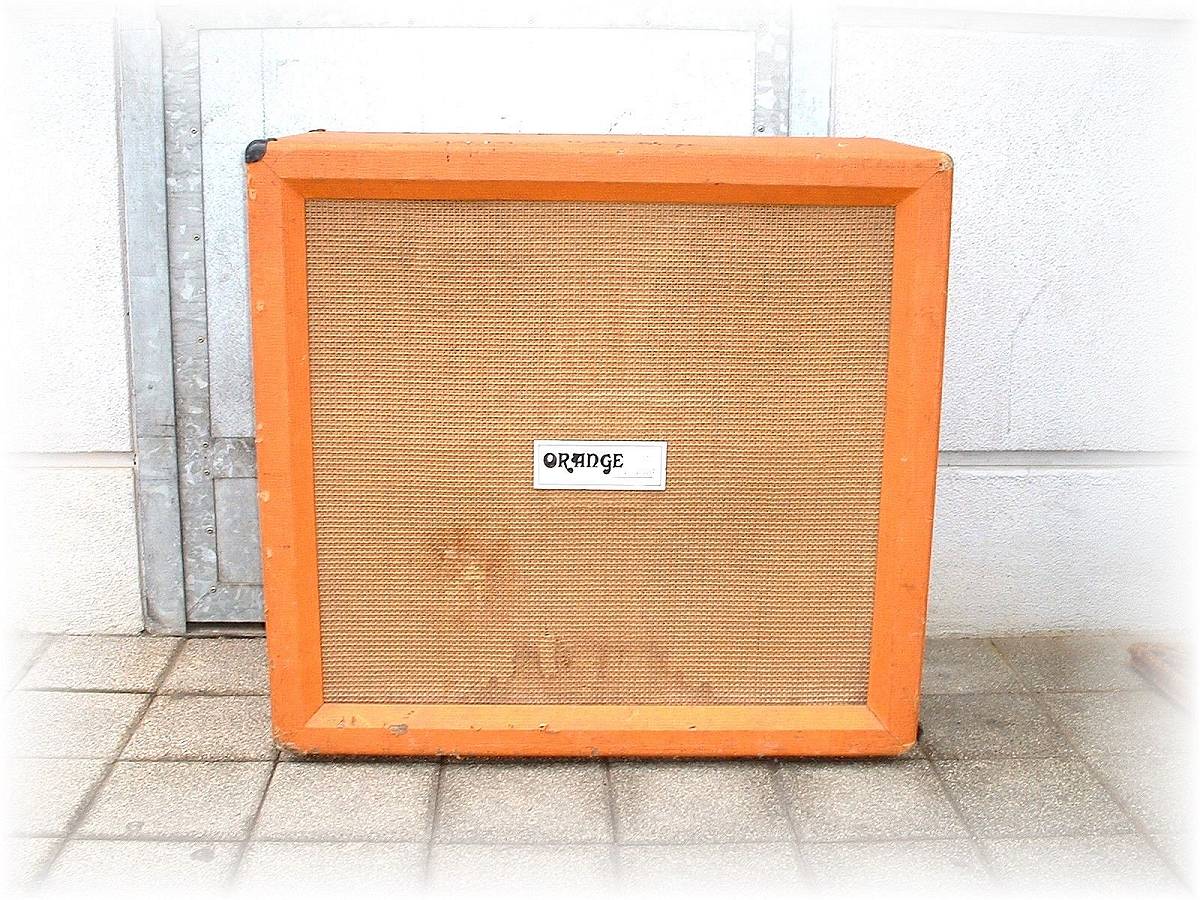 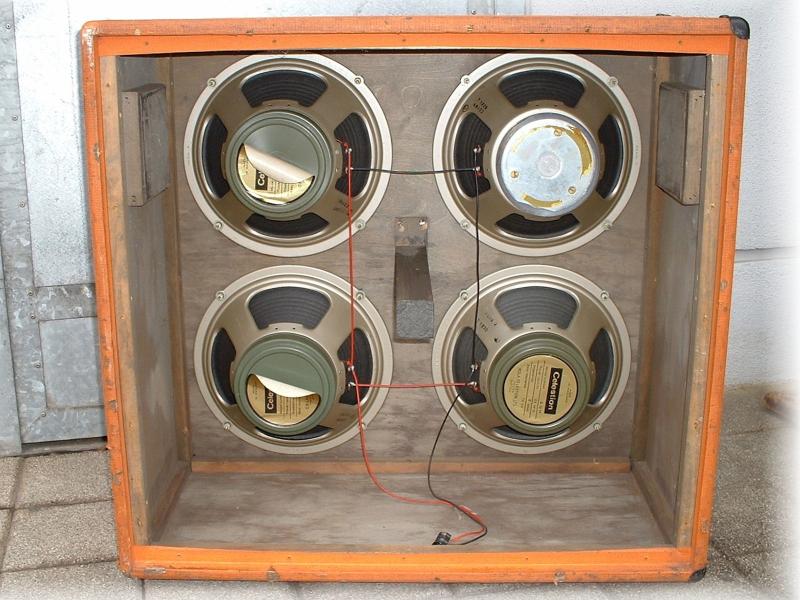 thanks Billy for your comments.
The handles and logo on my cab were added by MATAMP in the early nineties.
When I got the cab there were no handles whatsoever , no logo, and no gold piping,

but the cab was orange and it had the orange basket weave and had the orange speakers. (fanes ?)
the structure inside your OrMat cab looks similar but as you say, the depth is wrong and mine is painted black inside ????

I would need to take a look at the screws spacing

One thing I'd mention is that the screw spacing is regularly irregular - it looks about the same on all 4 sides.

I wouldn't be surprised it would be just done by one employee.
I'd prefer regular spacing, but that is plainly functional.
How's the cab anyway? Do you like it?
Ant

That's pretty wild.... it sounds like it's a very early cabinet - never seen the painted orange speakers before. How long have you had it?

I got the cab and the head in the early nineties from a local music store.

to be honest , even though the refurb is great, I wish now the cab had been left original.

Just following up on the speakers in my cab.

The chassis' are orange but no other disernable markings.......

Would I be correct in my thinking, pretty sure I saw a post with Fanes with white chassis' ???

Users browsing this forum: No registered users and 24 guests