YOUR fav fuzz pedal with your Orange ?

I do agree that with OR120 Master volume mode does kill the headroom and I think OR120 takes better all the fuzzes when opened on full - no attenuation.

I had hard time searching for best fuzz for my Or120. I love the sound of this amp by its own, but its to light for some really heavy sounds.

So for more gained and much more low end, I use DBA Fuzz War, gain on half and filter almost on the darkest position. Allso some boost by this pedal. It gives a really tight heavy sound, and it don't changes caracter of the amp that much. Huh, yeah, and I forgot… I have this pedal in true bypass loop pedal, with active volume pedal in front of Fuzz War, with minimum volume pot, so the signal going int Fuzzwar is reduced to lets say 25% of guitar signal. So If I want more gain and fuzzy top end I just step on a volume pedal and add some more. It works for me.

Now this one is my favorite!!! > Axis Fuzz!!! Damn! I got this just recently. It is far far most caracter full fuzz, that can go with my Or120. It really cuts through Or Gain stages like knife through butter. I can feel it cutting - fighting to come to power amp stage. It is really aggressive fuzz with fabulous touch sensitivity and really nice balance of frequencies. With my Ibanez Les Paul, I have to ride the volume pot. It can get hick ups, If I play it on full volume guitar.I'm so happy, that I found this pedal. I almost give up the idea of getting a really fat fuzzy tone with OR full Gain settings. I totally recommend this! And It plays great! You can play freakin jazz chords with this full gain monster and it stays under control and balance. So Roger Mayer Axis Fuzz - the one that looks like a Rocket!!!

And it works with Wah in front of fuzz!

For nice lead solo sound I tend to use BPC Tone Bander mk1. With this pedal, you can actually shred out your guitar. It lacks some of the low end, which comes handy sometimes. So it is not a rhythm fuzz. Just for solos to add sustain, some sparkle and compression. Nice. But I'm not totally satisfied with it. Need to investigate more on this one.

I tried many different fuzzes, some were ok, some so so, and some were useless. It is really a random thing for me.

One that I liked also was Fuzz Face Silicon.
But for this it was best to use just FF and two cables… nothing else in signal path. It is so sensible. Also the settings on Or were playing big rule here. For instance… If I was playing F.A.C. on 2… Fuzzface was actually sounding really bad. But on 1, WOW… like a different pedal. Also it has to do allot with Gain control and volume on guitar. Fuzzfaces like a dirty amps, but not that much gain like or Gain on full. So for me, It doesn't work in my current setup.

I tried also few different Big Muffs… Nothing there to be excited… just boomy low end, and messy stuff.

I tried also 2 vintage RAT pedals. Mk1 and 2. I actually use (sometimes) RAT to make a nice compressed clean sound. Otherwise totally useless on OR. (again… for my settings)

I just bought a Fuzzface silicon mini the other day. I'm still waiting for delivery and am really interested to see if I can get somewhere in the ballpark of Fu Manchu tone. Scott uses a vintage Univox fuzz, and Bob uses Creepy Fingers. We'll see what a Fuzzface does with my CR120.
Top

I should add that I wish Orange would add a switchable fuzz into their amps. It would be great to have a dirty and clean channel that you could also switch a traditional fuzz tone on or off, just like you do with a pedal. The doom/stoner rock scene would love that, me included. If they based it off the Black Arts Pharoah, that would rule.
Top 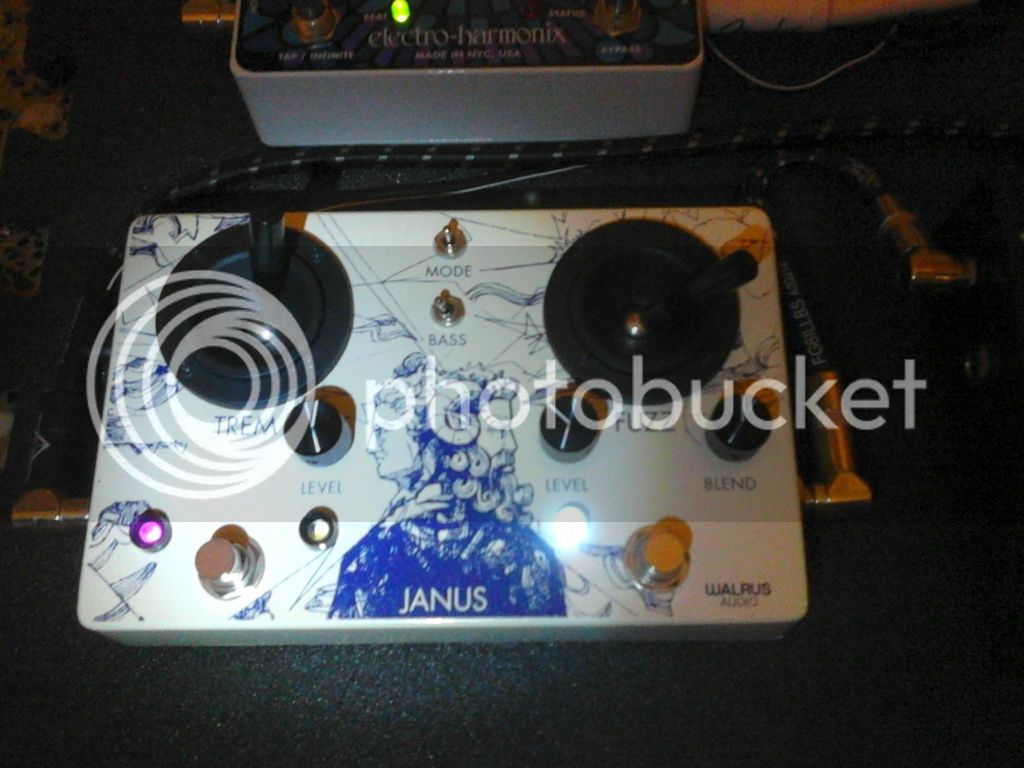 I was looking for a tremolo pedal when this thing crossed my way.
And because I didn't have a Fuzz it was like: two in one WTF I just buy it.
Couldn't be happier.

Having three different voicings plus the joystick makes it really versatile.
You can bleed some dirt into your signal or unleash a true fuzzocalypse.
I also really dig the bass boost switch, wich I have on all the time.

And then the big plus the tremolo, wich is really sweet, pretty mild even at the extremest setting.
Enough for me and makes sense since it's built next to a fuzz.

Users browsing this forum: No registered users and 45 guests