Letting someone else use your amp

Letting someone else use your amp

I know some people aren't very fond of letting other people use their gear at a show, but I had actually been wanting to hear another band play through my TV50 so I could hear what it sounds like from an audience perspective. It finally happened last night and it was actually quite awesome to hear what it sounds like up front! It was a pretty big room in a college cafeteria, unmic'd and played through my 2X10 cab and still performed REALLY well. It just made me love my amp even more after being able to hear it from both sides of the stage.
DOWNLOAD THE DIABLO STRANGE EP FOR FREE HERE -> http://diablostrange.bandcamp.com

Always fun to hear your amp through the audience ears. I'm with ya on that. I haven't had the pleasure of letting another band use my OD120 yet, but I never have a problem with it, it's an amp, it's meant to be played!

It was interesting to hear my old RV100 being played with a Ric 330 a couple years ago. Especially since I used to have a Ric 360. Brought back my old tones, that was fun!

Whilst I would never let anyone borrow my R30, and would never let anyone else play my axe at a show, I would have no problem letting someone play their own guitar through the Rocker.
Closest I have ever got to that was when I used to swap with the bassist, who is also a fine lead player, for a few numbers, but whilst I heard how the R30 sounded with his SG from on stage, Would be fun to hear it from out front with full band for sure.
Fender USA Standard Stratocaster
Gordon Smith Galaxy
Gibson Les Paul Classic
Faith Jupiter Jumbo Acoustic
Orange Rocker 30 HD
Orange Micro Terror
Orange PPC 212 OB
Lead
Plectrum
Attitude
Sorted!
Top

I almost NEVER loan out anything or let anyone else play anything of mine but in a situation where I was right in front of it like you describe would be cool. I'd love to hear my amp like that as well....

When my older stepbrother was amp shopping, he took me with him for me to play through a variety of amps so he could twist knobs and just listen! It really gave him a better opportunity to judge different amps and I think he chose well as a result.

I had a friend (almost wrote have but sadly my friend passed away earlier this year) who I would loan guitars and amps to for recording projects he was doing. But he was the only one....

I loaned him one of my Marshall Superleads (since they were so loud and I basically never used them) and he ended up liking it so much that I sold it to him for $450. He never took my name off of the back, though, and everyone thought it was a gift from a former girlfriend named "Claire." You can see it in this picture, but when you look at his Marshall cab, you can see why I am reluctant to loan gear. The head was pristine when I sold it to him - after a number of years, the head shell was basically falling apart from use and the rigors of many many gigs. 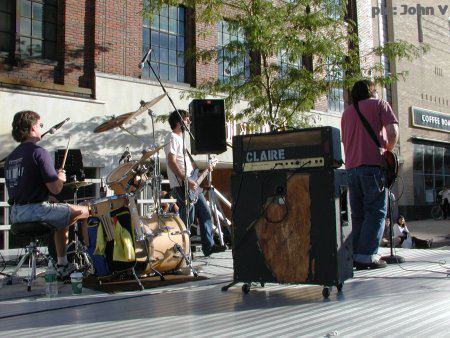 I've let someone else use my amp at a show, but the way he set the amp (mostly clean / edge of breakup) and the fact he used a Strat w/ Humbuckers it was more than likely very different sounding than when I use it. He sounded good though!
Top

I've let people play my guitar and amp at shows before. It all depends on who it is/how well you know them, etc. and how you would take it if they damaged something via accident. I'm not going to put anyone into a position to get yelled at or loathed because I allow them to use my stuff, so I already work that out in my head before I decide to do so. pile of poop happens.

The times I have done it, I really enjoyed hearing my gear, usually through more capable hands too. It makes you see it in different light and appreciate it more and even develop G.A.S. for your own gear. That is always a plus.

But, I would not want to be in position in which someone else was depending on my lending them my gear to get by. When I have loaned my gear out it was just for novelty.
Sincerely,
Ironlung40
OR120 Pix
Tiny Terror HW
Rocker 30 combo
Gibson SG 61'--Gibson RD Standard--Gibson SG Special 67'

I'll loan my VHT to anybody but get real paranoid about the Hiwatt. I also nearly lynch musicians who put their drinks on my amp.
Orange Gear:
AD200B MkIII
Terror Bass MkII
OBC810

I always find it very interesting.
Everytime I've let somebody play my gear, guitar and amp, I'm astounded at how different they can make it sound. Same gear, and most times, same settings too.

Not much of it but REALLY lucky to have it i my clumpsy hands.

Have loaned my amp and guitars to people I know, but only those I know who will take care of it...
Joe

I'd only loan out an amp to a friend if they were a good friend and understood tube amps.

I've had a few really awful experiences lending gear to friends. People cringe whenever I tell the stories.

In general, I don't lend gear out anymore, as i've had a few expensive things completely ruined doing that. But I also feel like a **** saying no when people ask me. it sucks.

It's disconcerting when people don't have the same values as you when it comes to taking care of things. I play the crap out of my guitars and i'm not afraid of dings or whatever. But I don't abuse them, and I certainly don't want other people doing so. I rarely borrow anything from anyone. But whenever I have, I treat it with the utmost care. You'd think everyone would, but i've learned the hard way that is definitely not the case.

Back when I had the Rockerverb, we played a gig at a local pub. The support band's guitarist came up to me and said "Can I use your amp, I blew mine up last night, I'm always doing that!"

I replied "Well, based on what you've just told me, NO!", and he got really shitty about it, all "Ah mate, it'll be okay!". Eventually he realised I wasn't going to budge & sorted another one out. Crazy, though! It was like a textbook example of 'how not to borrow an amp' O_o
Kerry

Too much gain is... just about enough
Top

This band . . .
http://www.facebook.com/pages/THE-CREEP ... 91?fref=ts" onclick="window.open(this.href);return false;
are the absolute kings of borrowing other people's gear and putting it to misuse.
I used to do the sound in a bowling alley in London and this lot were bottom of a four band bill.
They asked all the guitarists in all the other bands if they could use their amps. Their guitarist then proceeded to play through ALL the amps simultaneously, ALL of them cranked up really high. Then they complained that they couldn't here any vocals in the monitors. You couldn't hear any vocals out front either. It was just extreme tinnitus with a vague beat. I'll never forget it.
Top

never let total strangers borrow stuff, but i actually fairly often lend stuff amongst my close friends. often they're nice enough to return the favor. i'm letting one friend borrow my 212 cab for a gig in LA this weekend, partially because he's thinking of buying it and partially because he let me borrow his AC15 a week ago.

but strangers? i tell them everything's a rental.

Jason
Rocker 30
too many pedals
Top

I've let others use a few of my amps live when I've been around myself, including my OR120, Mesa Subway Rocket, Peavey C.30. I'm actually happier to let people use valve amps than solid state ones as going OTT with ss. amps usually breaks speakers. As long as no jerk pulls out the speaker cable valve amps will usually take some punishment.

Did a stint playing bass with the core band for a pub jam session in Haarlem. Used my 100W ss. Ampeg combo as did everyone else playing bass. It is a well thought out amp, easy to set up the input level with red / green LEDS, and as long as you keep in the green you can do whatever you want with the master volume knob and it just won't distort. So I just set up a good sound and level with my own fretted bass which was used by most players. If someone wanted to use their own bass fine, I'd do a quick set up for them, (making sure they weren't holding back on the bass's output level!

), get them a sound they were happy with and then threaten sudden death if I heard any distortion or they touched anything other than the master volume control. Worked fine - never had any problems, and yeah sometimes it is really nice to hear your own gear from the audience.

No I wouldn't ever lend my gear out to anyone I didn't know and trust, but I'm not into being too precious about sharing.

In the bathtub of history the truth is harder to hold than the soap, and much more difficult to find!
Top
Post Reply
24 posts

Users browsing this forum: No registered users and 9 guests