"I Wanted To Be A Rock Star, But I Must of Been Standing In The Wrong Line"
Top

I once bought a Mesa Roadster 100w head because I had convinced myself I needed a huge, expensive, all tube head to sound good. I kind of went about it the wrong way, because I wasn't evolved enough as a player to know what I was really looking for; I just fell for the hype and thought if everyone said it was great then it must be what I needed to progress. I tried a bunch of Mesas, Peaveys, Marshalls, and even a Krank (against my will, pushy salesman

). Unfortunately I live out in the sticks, and it's a 3+ hour drive just to try an amp out in the city, so with very little time to make a decision I bought the Roadster after having a good experience with it in the store. I was also a big Lamb of God fan at the time and thought I needed a Mesa to get their tone

Well, I got it home and after a week of fiddling I found a lot of fun sounds, but just couldn't get the same lead tone I was accustomed to with my Marshall. The 6L6 tubes sounded so dark to me, and no matter how I tweaked it I just couldn't get that high-end roar I wanted. It was a beautiful amp, and I love tweaking so I had a great time with all the dials and switches (that tweed mode was heavenly and had the most amazing feel), but every time I switched back to my Marshall I thought, "This is my sound. I like my cheap-ass hybrid amp better than this ridiculously expensive Mesa." I felt sick with buyers remorse, and ended up returning it and losing almost $500 to a re-stocking fee. Such a waste. I should have double checked their return policy before I bought it. I still feel stupid about the whole thing. It was honestly one of the most gorgeous looking amps I've ever seen in person, but bein' pretty isn't worth $2200 when it's not your go-to amp

I had a bit of an amp buying mare for a couple of years.

When I got married and moved into a relatively small flat, the reality was my Matamp half stack simply was not getting used, and I was using the church's amp playing live.

Sold that and decided I would buy a solid state practice amp for home use. Bought a Roland cube 20.

Sounded poor, gave it to a local church plant that needed something simple.

Found a deal on a matamp spirit 4watt tweed combo.

Liked it, but 8 inch speaker was too small. Asked matamp to put it into a 1x12 cab. However, the cab they made was far too big and heavy, simply huge in all respects (I love matamp my experience is that unless you tell them PRECISELY what you want, they will do what they think is right!)

Eventually, sold that and bought an HT5 combo on the basis that it should be loud enough for church use. Did not find it was loud enough clean.

So, went without an amp for abou a year, but after finally getting tired of the church amp found a great deal on a virtually unused R30.

Many guitars, many pedals.


"God is most glorified in us, when we are most satisfied in him." John Piper
Top

My first real amp purchase was a Carlsbro 60w head, that I bought cheap off the former guitar player in a now defunct band I used to be in. Real P.O.S. head with ancient tubes and faulty electronics. It played loud enough for band practice, but if I turned it up any louder, it would just let out this high pitched noise, even after I changed the tubes. But money was tight and I had already used it for a year/year and a half, so I felt kind of obligated to buy it. Also, I wasn't very tone conscious.

Second amp was a Vox Valvetronix AD120VTX, solid-state amp with one pre-amp 12ax7 and a ton of different amp modellings and effects built-in. I was actually pretty happy with it for a long time, until I started to focus more on my tone, and I discovered how bad it sounded. Really bad break-up, even when it was supposed to be clean. Of course, I pushed it really hard all the time, so it didn't stand a chance.

I guess you learn a little all the time, and sometimes you take leaps in your evolution as a tone chaser... My previous Orange AD30 was the first step towards better tone, but (this is gonna sound crazy) it just didn't have enough gain for me. I play a TH100 head now and I'm so much happier - of course, I'm still on the honeymoon with this head, so everything is pink clouds and unicorns and wittle bunny wabbits. Hope the feeling lasts.

it was just sort of lifeless. changes tube, tweeked bias. if you turned the reverb off to just hear the amp you realized it wasn't really anything special.
only amp i have sold. there was nothing redeming about it that i thought warretned keeping it.

of course with that said i believe it is one of the highest selling amps out there. go figure.
Top

I'm afraid to post on this subject...the mods might revoke my 'Orange hero' status regardless of the number of posts I've made.

I probably have the worst sort of GAS because I have made some rash decisions and a) ended up with gear I really didn't like from the off and b) held onto thinking I could make it work via outboard gear. Wrong of course but I'm a slow learner.

Mesa Trem-O-Verb combo. Not much verb and very little trem. Despite claims of versatility it simply sounded like a snarly, boxy version of the 90s Rectifier sound. Imagine my shock when I saw Jonny Greenwood from Radiohead with a rig of two TOVs on stage. I'm not a Radiohead fan but given their music I would have thought he'd steer well clear. On a positive note, it led me to purchase my Orange RV 50 Head.

Tech 21 Trademark 60. I was another sucker in search of a lightweight practice/backup amp who didn't care it was solid state given its intended use. Supposedly their SansAmp pedal in combo amp form. Well, I love my SansAmp bass pedal (no bass amp or cab on stage and great sound through the PA! Ha!) but the Trademark provided nothing but the usual SS amplified telephone sound. Volume control from silence to shattering windows with nothing in between. It was light though which helped when I sold it off and had to ship it

nedcronin wrote:Fender Hot Rod Deluxe. I bought one when they first came out. Huge let down. They don't make em like they used to!

I'm really surprised to see so many players using them, from locals in clubs to pros. They are loud enough to strip paint even at the lowest setting.

I went to an audition once in a very nice studio and was told to bring only my guitar as they had a HRD set up for my use. I struggled with it for a couple of numbers and ran out to fetch a Vox Valvetronix 15 I had picked up for a bargain and left in my car just in case. Put it on the AC-30 setting and off we went.
Top

Ronnie Robinson wrote:I'm sure it cant only be me who's done this. Trying something in a shop is so different to gigging with your usual stuff

So here's mine...a Blackstar Ht60 which I bought new last year. Build quality was decent (but not close to Orange build quality) and the power tubes failed within 2 months and I just could nt get an overdrive sound I was happy with despite changing all the tubes and the speakers. I sold it after 4 months

This was bought on the back of a ht5 which Ive owned for about 4 years. The Ht5 sounds great (still on original tubes) but the 60 was a major dissapointment.

I have an HT-1 and it sounds really great.

My TV200 sounds better though 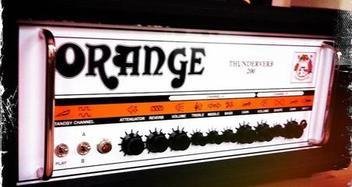 Not had a problem, but have been lucky and only have bought 4 amps in the past 40 years.

I have been tempted to buy amps in the past that I am now glad that I never bought. The only amp I regretted not buying I was able to find a couple years ago, used, and for a great price.
Bob

Hi, new here. To OP, I was on the blackstar forum too, also had an HT60 Stage, for almost two years! Could never get a good sound out of it, and I had LOTS of troubles with tubes and what not! Got me an OR15 last week, very pleased, sounds a lot like my old Marshall, which I stupidly sold when I quit playing ten years ago! And the OR15 is easy to dial in for an old fart like me!

Oh dear, i forgot my first story. I was new and didnt have any clue about amps.
I only knew marshalls and and owned an marshall mg 15 which was way to quiet with my first band.

So the other guitarplayer told me i should buy an ENGL because they can do everything.
He was also this scooped mids thing, which i learned to hate.

When i had the ENGL amp i spent hours on tubes and speakers and it all sucked no matter what i did
the amp just sounded bad and lifeless to me. It was super compressed and just cold, perfect for swedish metal bands.
I lacked everything i wanted and more. I hated playing guitar though this amp and i liked my little MG15 a lot more.
A guy that looked like an emo bought the amp and i bought my first good amp... the Matamp GT-1....

The matamp had it all: insane dynamics (still the most dynamic amp i know), from clean to crunch and this fuzzy vintage distortion we all love. But it is a very very unforgiving amp and it eats power tubes. It eats them.
accept darkness.
Top
Post Reply
41 posts

Users browsing this forum: No registered users and 20 guests