a.hun wrote:
First thing is to avoid any with a horn tweeter. These sound terrible for guitar, especially with any distortion.

Harsh, fizzy, raspy, really nasty, and not in a usable way, not even if you like extreme guitar sounds...

Electric guitar sounds once they been through a guitar speaker have very little power at all in the frequencies above about 5kHz. Though there isn't very much treble power in most electric bass sounds, modern bass sounds often do go to much higher frequencies than guitar. An HF horn in a bass cab allows those (lowish power level) high frequency sounds from a bass to be heard - if wanted anyway. (Bass can actually be a much more 'full frequency range' instrument than guitar is and modern horn equipped bass cabs often go up to 15 - 20kHz instead of the typical 4-5kHz for guitar cabs!)

Imagine you were expecting to hear a nice rich trumpet, and instead you got a horrible ice pick 'gazoo on bad steroids' sort of sound, except trumpet loud. That is what happens when you use a speaker with real treble for electric guitar, especially a piezo type HF horn. Seriously, I've been there and it just doesn't work!

Probably wouldn't matter for long though to be honest. Since the guitar itself would put out lots of mid / high frequencies, and the bass amp would amplify them quite happily, you'd end up putting out a lot more power at those frequencies than the horn could ever handle and would blow it real fast. And you'd be happy it blew - trust me on that!!!

So why not just buy a cab with a horn and turn the horn down?

Because you'll almost always find that the main speakers in horn equipped bass cabs won't go quite high enough without the horn to sound any good for guitar. The crossover frequency may well be as low as 2.5 - 3.5kHz and with the horn dialled out your guitar would sound too muffled. (With the horn dialled even a little in you'll suddenly have those nasty raspy high frequencies back again. Just a little horn won't cut it either!)

That is why I'd honestly suggest non horn equipped cabs like those I mentioned.

Yeah I've read that a couple of times sowhere, that technically Bass-amps and bass-speakers have a larger range and are in some ways actually quite superior to guitar-amps/speakers. But that the sound we love for guitars is essentially just 'lo-fi'?

Would it help to cut off treble completely? That's what happens in my rig, I completely roll off the treble since the R30 handles my mids/treble needs anyway and both amps are always on at the same time.

Nevertheless, checking the 'barefaced' website now which looks interesting (especially the compact and super 15)! You wouldn't happen to know of any decent, affordable speaker-cab builders in the Netherlands now would you?

How do 1x15's compare against a 4x10 though? Is there truth in saying that a 1x15 can sometimes feel a bit 'slower' and 'mushy', less direct? I mainly play a lot of fast paced stuff, so it's quite important to me that whatever I play stays defined through the bass-amp.
The Whims of the Great Magnet
Some of my music photography

Time used to be when people thought you couldn't get good bass out of 10" speakers. Of course you can. You can also get good treble and fast response out of well designed modern 12" and 15" drivers. (There are also some great sounding 15"ers for guitar too remmber! Check out the 1x15 version of the Fender Twin combo sometime and tell me it is dull or slow sounding...

Read what the 'Barefaced' guy says about 15" speakers (and other sized bass drivers) on the 'Compact' page, and also on the technical section 'Cone size vs frequency response' page.
I have that cab and promise you it doesn't sound either mushy or slow. Far from it: I've never struggled to get enough treble with it. In fact I'm astounded just how big and full bass sounds at what high volumes you can get out of these small and lightweight cabs. Modern bass cabs technology is just amazing, even compared to just a few years back. I mean this cab weighs a lot less than my half open back Mesa 1x12 guitar cab. 12 kg for a cab which (with a powerful amp) can easily fill a decent sized club with rich full but punchy bass sounds is just stunning.

If you cut all the treble you'll cut all the treble and get a dull and undefined sound. If the R.30 is going to cut through enough to give you all the definition you need than fine. If you up the volume to the point where it can't do that any more though you are going to need at least some top end from your bass cab.

I only know of Hevos and Vanderkley building bass cabs in the Netherlands. Both are pretty high end / expensive. I'm pretty sure you'd get more for less with that English lot. That was the conclusion I came to myself nyway when I was buying recently. (I also bought a pretty obscure German 2x12 cab, pretty similar to the Barefaced Super 12 as it happens.)

Thing is though that there are tons of other older heavier but still great sounding bass cabs out there. And second hand it shouldn't be too expensive at all to get something suitable for you. You'll need to try a few and see which work for you. Ultimately that is going to have to happen anyway. I can tell you about some of the best bass cabs out there because I've been researching that for myself lately. But you don't need to spend a fortune on one yourself. You might want to save a bit for a suitable amp too...

BTW You can do a lot worse than Peavey bass gear. I ran two Peavey cabs with my Orange for years, and the 4x10 in particular was a great gigging cab for me. (Lousy for guitar though!!!) But seriously you might want to try digging out some s/h Peavey stuff though. The bass gear is usually well sound, and well affordable too.

What are you going to be needing out of it anyway? Are you planning to run the bass rig basically clean and use the Rocker 30 to put dirt on top. Or how do you like to work things?

Andy, I can't thank you enough for your posts! Kudos!

My baseline sound through the bass-amp is never clean, always growly. I regularly push that even further for certain parts with an MXR Micro-Amp and EHX The Mole.

Here are my current settings that I changed recently (loud bedroom tested, rehearsal tomorrow)
The peavey has a quite annoying compressor which activates and destroys my playing whenever I set the post-gain higher than the pre-gain. This only really happens on rehearsal/gig volumes though. So I generally set my pre-gain to around 8, adjusting the post-gain for volume. If this compressor-problem wasn't here, I think I probably would set this amp less dirty. 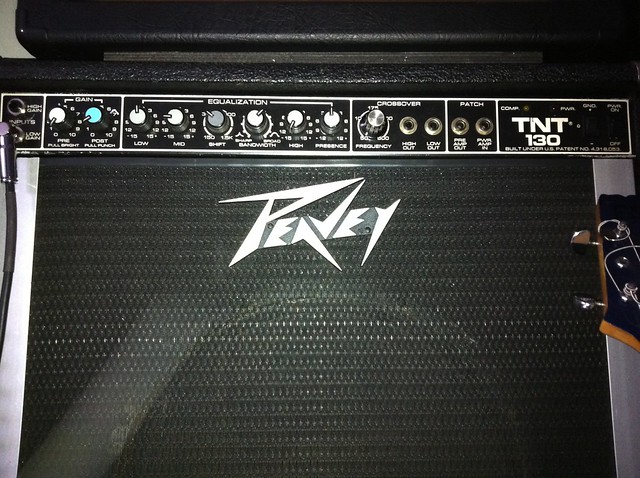 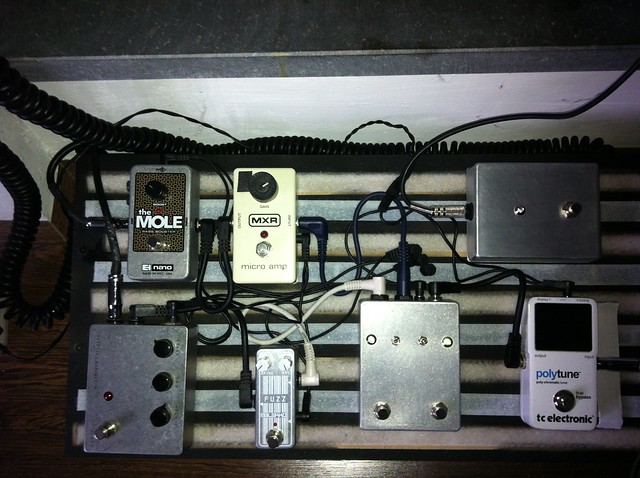 And I agree, the Peavey isn't bad perse but it's starting to become unreliable (buzzing, signal drops...) and ever since I've been spoiled by that Ampeg stack I definitely know what I'm missing out on. Basically I just wan't to find something that will get me closer to that same experience but will be plenty for rehearsals and pub/small venue gigs.

I'm gonna PM Teddy though and invite him to also chime in, since he basically is in the same boat.
The Whims of the Great Magnet
Some of my music photography

Hi dude, got your private message.

I haven't read the thread fully, am very busy, but thought I'd contribute as you requested.

Obviously I have some experience in this area. When playing guitar through a bass rig you can throw conventional amp wisdom out of the window - no offence to anyone who has previously commented, but advice from bassists and guitarists who haven't actually tried a rig containing both guitar and bass amps themselves cannot help you here and their advice can be discounted.

Experimentation is key. I've tried a lot of different bass amps in my setup, including an all-tube SVT and 6x10 in my rig on one tour - also tried an AD200B and other expensive bass amps... I keep coming back to solid state bass heads in the 500w+ category, preferrably with a powerful EQ. I use a Musicman HD500 but have had success with stuff like Ashdown ABM EVO 500 in the past.

I hit the front end an EQ pedal pushing the lows, an octave pedal (POG) and a bass fuzz (Bass Big Muff). The reason solid state works well in this setup is I'm not looking for tube overdrive on the bass side, I'm looking for a solid platform with loads of headroom that will take my fuzz and pushed low end. The resultant sound isn't recognisably what you'd call 'great guitar tone' on its own, but that's not what you're after here - biamped and blended correctly with a 'proper' guitar amp it sounds HUGE.

Good luck with your experimenting, and remember, expensive does not always equal better. Nor do tubes, contrary to popular wisdom!
Teddy
The Blackwater Rebellion: 2-piece alt rock duo http://theblackwaterrebellion.bandcamp.com/
I play an AD30TC
Top

If you're looking for cheap powerful solid state then look out for used GK, Hartke, SWR, or Trace Elliot heads. These were extremely popular in the 90's and generally go for a song on the used market.
mmmmmm drop

You should get an old Fender 2X12 combo as suggested, or look for an ampeg version. If your thing is modded guitar thru bass gear then GO NUTS, but a SVT thru 8x10 for guitar?!?! I LOVE IT...and wonder...if you've listened to Thee Oh Sees before? They rock guitar for bass (except lately at times), and its FARKING AWESOME.

Anyway, their git-bassist Petey Damnit rolls a 2x12 combo Ampeg or Fender and it gets beef but still guitar.

The V4B is AWESOME and you'll have NO problem rolling it HARD at full band volume. So nice and warm and gooey. Just beware oh BEWARE the servicing costs...
tube huffer
Top
Post Reply
22 posts

Users browsing this forum: No registered users and 8 guests