The forum has a nice international representation and I know there are are many soccer/football fans here so who do you like this year and why? Myself I like Argentina and I think USA is the strongest team in years and yes they were robbed yestereday but its all good and just one of those things in this type of competition.
Top

Im from england and there playing like crap! they couldnt win a game of snap against stevie wonder!

Great players but as a team everything is wrong!

I dont really know jack about football but always take an interest in the world cup and its easy to see what teams work well together and the ones that dont.
Tone is everything
Top

Bad call on the part of the ref in yesterday's match.

Brasil seems to always get to the finals, but I wouldn't be surprised if Germany or France makes it...

Big disappointment to me tbh, but then again maybe I watched the wrong games.
I play bass.
Top

i'd like England to do well, but as everyone knows, thats more than likely just not going to happen, after yesterday's match i can't see them going much further this world cup. not sure who i'd like to win, maybe spain, but then they didn't even play as well as they were expected to in their first match
Liam

I'm for Germany. All they have to do is beat Ghana and they're through to the knockout rounds.

So far this World Cup has had its share of surprises. The biggest disappointment at least for me is the how the games have been called a lot of these refs are very inconsistent and I would say biased. But it wouldn't be World Cup without some sort of controversy.
Top 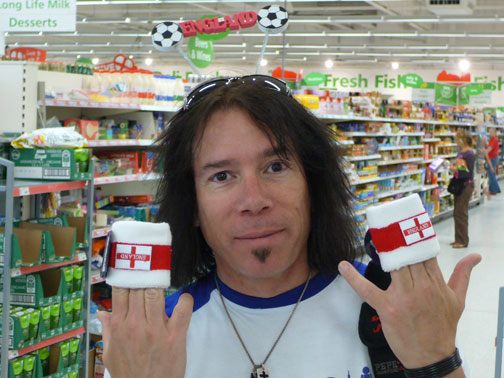 always been a fan of Netherlands

This is South America's world cup.
Paraguay tied with Italy, the actual world champ, Argentina has won 2 mathes and made 5 goals, Uruguay tied with France and then won 3-nil to some team i dont remember. Brazil won to Korea but playing really mediocre football, just as it did in the clasifiers. As for Chile, we won to Honduras (yeah, big deal) but playing a very aggressive football, we were very superior and thing went right. Its actualy pretty sad cause Switzerland beat Spain and now Its very possible to be out of the world cup even winning to the swiss. (in the case Spain win vs Chile and Honduras and make lots of goals) Anyway, I have a lot of faith in the guys, we've been doing real good. GO CHILE!
What happened to the USA was complete BS and that guy shouldnt work professionally anymore, he clearly didnt like the US. Now im officially rooting for the US to go far after that fiasco, u were beat 0-2 and made a great comeback, it was a great watch.

This is my list of teams that should be feared:

noisemaker wrote:always been a fan of Netherlands

doesnt hurt that they're orange

There are only two things that I hate - people who are intolerant of other cultures, and the Dutch

Wendigo wrote:I'm for Germany. All they have to do is beat Ghana and they're through to the knockout rounds.

Yeah, go Germany. They played so well in the first match but somehow couldn't make use of their chances in the second. But they'll beat Ghana for sure, just need a bit pressure


gnosticbass wrote:So far this World Cup has had its share of surprises. The biggest disappointment at least for me is the how the games have been called a lot of these refs are very inconsistent and I would say biased. But it wouldn't be World Cup without some sort of controversy.

Lots of surprises, can't predict a lot yet. I hate how some refs give yellow cards for everything, it really intimidated our team in the last game
Ben

This WC has been surprising, lot's of underdogs. Lot's of bigshots being shot down. Which I really like btw, keeps things fresh. I really wished Kameroen would have won from the Danish though, they deserved it so much more! They had some really intriguing and dynamic playing going on in the field, you could really tell that a lot of them have had lot's of tricky street-soccer experience.
The Whims of the Great Magnet
Some of my music photography

must say i have enjoyed the party atmosphere an the 'merican and mexican fans been the best to party with.

my prediciton ,,tough one to call but i think germany looked good an the lil aberation can be overlooked. I predict italy an england will awake from the slumber but brazil and argentina been on top form.

Users browsing this forum: No registered users and 43 guests