yeah, american made. I really like the current neck pickup, I just ordered one of his p90 bridge pickups though. Hopefully that will be pretty good. I think thats the same model you got for your bridge pickup?
Bad Cat Hot Cat 30
Bad Cat 2x12

it is indeed, hope it treats you just as well.
Tyler

Ok, so far seems as though the Jazzmaster is the route to go. Keep in mind that I've played Gibson my whole life and if wasn't Gibson, it still had Humbuckers....this being said, although I am after a brighter, twangy sound, it sounds like the Jag may be a little too THIN sounding as well as too TWANGY....am I right.?

Sounds like the Jazzmaster would brighten my tone up just enough. Now, the Jazmaster with the 2 Humbuckers,...wouldn't that just sound like a Les Paul or any other guitar with Humbuckers for that matter??

I've had my MIJ Jaguar for 13 years now. I love that guitar. It does sound a little thin, but you can make adjustments in your EQs. I think it reacts incredibly well with distortions. I love it. Those switches like to break though.
http://myspace.com/churchoftheredmuseum
Top

My Jag is very fat sounding. The rhythm circuit is very full and growly.
Top

<blockquote id="quote"><font size="1" face="Verdana, Arial, Helvetica" id="quote">quote:<hr height="1" noshade id="quote"><i>Originally posted by deVonder</i>
<br />Ok, so far seems as though the Jazzmaster is the route to go. Keep in mind that I've played Gibson my whole life and if wasn't Gibson, it still had Humbuckers....this being said, although I am after a brighter, twangy sound, it sounds like the Jag may be a little too THIN sounding as well as too TWANGY....am I right.?

Sounds like the Jazzmaster would brighten my tone up just enough. Now, the Jazmaster with the 2 Humbuckers,...wouldn't that just sound like a Les Paul or any other guitar with Humbuckers for that matter??

NO way dude once you engage the coil taps u have single coil sounds at flick of a switch I played the guitar in your pic at a rehersal in the riot girl band I play in and used it for the whole rehersal and it screamed. I played the Distillers Drain the Blood thru to Marilyn Manson's version of Sweet Dreams and this guitar blew me away.I coulda played it all night but I had to give it back to my friend,it has been on my gas list ever since. As to your other question will it sound like a Les Paul no way dude different beast altogether due to bolt on neck,body timber etc and lots of other variables this is the reason that Fender make this model because so many vintage Jags went under the knife to get the Humbucker treatment just ask Sonic Youth.The best way I could describe the tone I got that night was a nice cutting edge without excessive brightness and some extra meat that would have been lacking had it only had single coils.If you need more info on this don't hesitate to ask me more but all I can say is that if you are a Paul player you might have to make a few minor adjustments to fall in love with this guitar but not many I would imagine.

Ok....I had no idea this Jag, the one in the picture had coil taps. I didn't read that in any of the descriptions. but in that case, sound like a good match. Mind you though, through this GASEOUS journey I've taken into the realm of Jag's and JM's, I've taken a liking to the vintage look and feel of the 62 reissues....

Another thing that nobody has mentioned yet (unless I didn't read one of the posts correctly) is that no matter which you get, the body style is one of the most comfortable you'll encounter.
-Tafa

I bought a Jaguar myself- it was no contest, hands-down. I prefer a longer scale, but I was looking for the sound of the Jag. I played a whole bunch- USA and MIJ and I thought the MIJ Jaguar was better made. I wanted a custom color and the USA ones don't have matching headstocks which is just wrong. I swapped out the pickups for some hot vintage Duncans and then took them out to pot them since they were unpotted. PITA. Also put a pearl guard on it as well as a Buzzstop and Mustang saddles- which is what you'll need to do too if you get a Jazzmaster. I got a burgundy mist one and it is one sweet guitar! 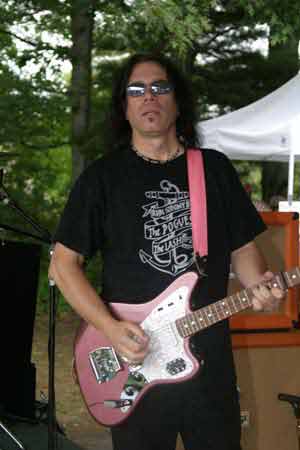 finally. The Jag is the way.
Top

I can agree that the Jaguar looks a bit cooler, but I really like my Jazzmaster, it's a gorgeous blue and I like the proper toggle switch on the Jazzmaster so it's easier to change pickups mid-song instead of those tiny sliders, not to mention it's snappier. If you're looking for a true Fender the longer scale is really required for that twangy sound. My Jazzmaster is a CIJ and I quite like it, but you have to either swap out the bridge or file the grooves deeper and use locking glue. On mine, the neck pickup is nice and round with a lot of girth and the bridge is pretty bright, but with my Orange it kind of evens out the brightness because it's such a dark amp. The middle position is really the best though, really gets this great balanced sound.

Let us know what you decide!
http://www.myspace.com/sleuthband" onclick="window.open(this.href);return false;
Top

IMHO the Jazzmaster looks and sounds better than the Jag...
Get the JM...you will never look back!
Top

I want the twang, but not too thin sounding.

To each his own...I personally
always hated the slider switches on
the Jaguars. I also didn't like the
other volume and tone control up on the top